No one in my family ever mentioned we might have ancestors who came over on the Mayflower. My grandmother, Milly (Booth) Rollins, said her large ironstone platter that has been handed down in the family was said to have come over on the Mayflower (I own it now, and it certainly isn’t that old!). But she also thought her Kelley family members were 19th century Irish immigrants. She was surprised when I found David Kelley/O’Kelley/Okillia (and other various spellings) came over in the 17th century, and even if her platter didn’t come over on the Mayflower, lots of our ancestors did.
It was so surprising to uncover one Mayflower ancestor after another, and I plan to write a little bit about each one. I recently posted my Francis Cooke line of descent that was recently approved by the Mayflower Society and thought he’d be a good starting point. See this post for the line of descent: http://massandmoregenealogy.blogspot.com/2011/07/1st-post-francis-cooke-of-mayflower.html.
I love learning about the lives our Mayflower ancestors led. In school, we were told the Pilgrims were all righteous, pious people who came to America for religious freedom. I had no idea that some of the Mayflower passengers weren’t compelled by religious reasons but rather for a fresh start or for the opportunity to own their own land. I get some kind of warped amusement that I descend from William Brewster, one of the group’s religious leaders in lieu of a minister, as well as John Billington, the first white man executed in the New World. 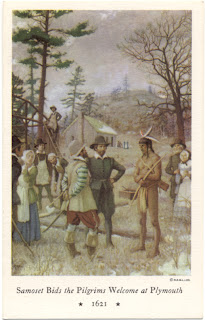 It is not known where Francis Cooke originated, but it is likely he was born in England about 1583 and died in Plymouth in 1663. Francis was a woolcomber by trade (a job that entailed working machinery to comb, or separate, fibers for spinning), and he was at Leiden with the Pilgrims. He married Hester Mahieu, a Walloon, in Holland, and they had seven children: Jane, John, a child who died in infancy, Elizabeth, Jacob, Hester and Mary. Francis and his son John came on the Mayflower, with Hester and the rest of the children joining them later. The Cooke family was one of the few Pilgrim families that did not suffer a loss during the first difficult winter in Plymouth.
His inventory lists a Bible and four old books, so he had some formal education. He was involved in Plymouth government, serving on various committees and juries.
On a side note, Presidents Franklin Delano Roosevelt and the Bushes descend from Francis Cooke, as does Anna Mary "Grandma" Moses, Richard Gere, Dick Van Dyke, the Beach Boys, and Orson Wells.
There are countless websites pertaining to the Pilgrims, but here are just a few I’ve found helpful:
http://www.mayflowerhistory.com/
http://plymouthcolony.net/plymouthcounty/
http://www.pilgrimhall.org/
http://www.franciscookesociety.org/
http://www.plymouthcolony.net/
http://www.rootsweb.ancestry.com/~macplymo/
http://www.themayflowersociety.com/welcome.htm
Posted by Chris at 3:52 PM