John Waterman was born 19 April 1642 in Marshfield, Mass. (Marshfield VR). He was the son of Robert 1 and Elizabeth (Bourne) Waterman.

Thomas Bourne, John’s maternal grandfather, left John two pounds in cattle, corn or goods in his 2 June 1664 will, although he does not name him as a grandchild in the will. His brothers Thomas, Joseph and Robert Waterman also received bequests.

On 29 July 1669, John Waterman and Stephen Bryant were appointed in Plymouth to view land and report to the town.

Samuel Sturtevant of Plymouth wrote his will 1 August 1669. He names his son-in-law John Sturtevant, bequesting him one half of his share of land he bought of Edward Gray called Major’s Purchase, near Namassakeesett Pond. Namasakeesett was an early name for Duxbury.

Thomas Little’s 17 May 1671 will mentions Plymouth land he bought of John Waterman.

John Waterman was a witness to the will of Thomas Little Sr., on 19 February 1675.

One 1 April 1689 Joseph Waterman of Marshfield deeded land to Samuel Little, “Always excepting out of sd fifty acres of land which I sold to John Waterman lying between the high way and the sd brooke …and is now in the tenure and occupation of Samuel Holmes.”

I descend from their son Samuel who married Mercy Ransome.

John was a Deacon in the church. William Cutter wrote that he moved to Warwick, Rhode Island between 1685-1692. He gives them six more children born there, with the last born in 1703, but that seems unlikely that Ann would still be bearing children. I would imagine this is another John Waterman.

On 19 December, 1687, "John Waterman of Marshfeld," for £30, sold to "John Carver of Marshfeild .... all that my Dwelling house barn upland & Marsh or meadow which I now have within the Township of Marshfeild .... more perticulerly My house barn & field .... bounded as followeth. viz Northward with the land of John Sawyer Eastward by a brook of Water Southward with a marked birch tree standing by said brooke thence Runing Eastward on a Straight line to a great oake Stump with a head of Stones about it being the Southermost Corner of said field near the Town Road or high way & bounded eastward by the said High Way & also that my two acres of marsh or salt meadow .... in Said township & bounded Southward by a ditch that adjoynes to the marsh of John Barker & westward by the upland of Said barker & extends northward about twelve Rods or Perches according as the same is taked forth & bounded & to extend eastward to a ditch there Cast up or made.  And also that my Small percell of Marsh which I had of Thomas Tilden lying neare to a Certaine Island formerly Called Hatches Island & is bounded easterly by the North River & northerly by the Middle of a ditch & thence on [p. 66] On a straight line to a stake that is a Corner bounds standing near the upland & westerly as it is staked forth being nine Rods in width & Southerly by Certain stakes till it Come to said River & is about twenty Rods in length"

At a Plymouth church meeting in 1698, John and Anna Waterman were among a group of congregants dismissed from the church. Perhaps this was to worship in Plympton?

John died 14 September 1718 at Plympton. Plympton Vital Records list his death as: Deacon John Waterman deceast Sept 14 1718 on Sabth at 12 o’clock at night (in the 77th year of his age; buried near the northwest corner of the burying place at Plympton was added to the transcription). 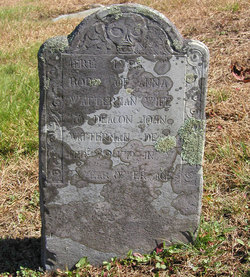 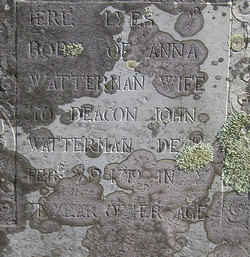 It's my favorite time of year and despite always vowing not to, I get carried away with decorating, crafting, buying presents, and cooking and making a "perfect" Christmas for my family. So, my posts haven't been very frequent over the last month.

I had a nice Christmas present in the mail on Friday. The Cape Cod Genealogy Society Journal published a story I wrote on Valentine Kelley of Dennis Port. It's similar to the post I wrote about him here.

I hope all my blogging friends and cousins have a wonderful Christmas,
Chris

It seems Thomas did not know how to write as he and his wife Rebecca signed with their marks to receive a portion of her father's estate on 10 June 1758.

Rebecca died of small pox in 1765 in her 56th year. A total of 61 Chatham residents were stricken during the small pox epidemic and 24 of them recovered. Funerals were omitted so they could be buried quickly, often at the back of family farms. She is buried at the Old Burial Ground in Chatham.

Hope had married, first, Nehemiah Doane and had Reuben and Samuel. Some sources also give them children Paul, Sarah, and Mercy but I'm not certain about that. Nehemiah died of small pox in 1766.

Hope was 20 years younger than Thomas, but they had both lost their spouses to small pox and had children to raise so perhaps that is what prompted their union, but Hope was to face more grief. Fourteen months after their marriage, Thomas died 4 December 1768 at Chatham in his 57th year. He is buried at the Oldest Burying Ground in Chatham, although when I visited there I could not find his stone. Perhaps it does not survive or is unreadable.

The birth of Thomas and Hope’s son David’s is not recorded but he is shown to be their son through probate records. Thomas’ son David from his first marriage died in 1752 and even if he was still living, he would not have been a minor.

Thomas died intestate, but the probate files also have a division of his estate and a difficult-to-read inventory.

We the subscribers being directed and empowered by the Honorable James OTIS, Esquire, Judge of Probate for the County of Barnstable to divide 2/3rds of the real estate of Mr Thomas HOWES, late of Chatham and county, deceased; to and among his children by virtue of said power and according to the directions as have sett off and divided said estate as followeth: Viz: First to Thomas HOWES as the eldest son of the said deceased for his 2/5ths of estate- one parcel of land & here the deceased house stood from a stake of stone by Seth SMITH'S fence in the midway of the northerly line of the house lott and set southerly to the middle of the chimney brick and on thro the house lott a --- and so on to the publick road all the easterly part from this line to Capt HOWES lane with the part of the house here in compre? this a piece of land and swamp on the southward of the road about 3-- & only allowing to kitchen a privilege as hereafter mentioned and also 2/3rds of the deceased s ------ pond in partnership with Capt HOWES; also 1/2 of the --- old barn with liberty to take it off the land it now stands on and 1/4th of the estate in partnership with Joseph HOWES
Secondly- to Richard HOWES for his 4/5ths part of the westerly part of the house lott from the aforesaid lines ran thro the chimney to Joseph HOWES and the westerly part of the house and the other half of the barn and 1/3rd part of the - meadow at the Oyster Pond aforesaid with - part of the wood lots aforesaid. and also privileges to fetch water from the well on Thomas his part and to drive creatures to the watering place as these maybe ---
Thirdly- To the -- as in all the land adjoyning Matthew TAYLOR'S lane and all the half-- meadow, and  the 1/3rd part of the -- eleventh of the meadow called the Red River marsh which is in partnership with Zachariah SMALLEY and others and a 1/3rd of the land within the meadows fence belonging to -- 2/11ths and 1/4th part of the other land in partnership
Fourthly- To David HOWES a miner, all that parcel of land near David COLLINGS, his house to the southward containing about 11 acres more or less and 1/3rd part of the aforesaid 2/11ths of the meadow and land at the Red River and 1/4th part of the other wood lands and this we give in as our report thereon under our hands the 5th day of January in the 10th year of his majesties reign 1770 James COVELL Reuben RIDER Joshua ATKINS

Thanks to Marge Howes Perry for the excerpts from Thomas’ probate records; I have not yet seen the documents myself.

I descend from Thomas and Hope’s son David Howes who married Rebecca Baker. I wrote about them here.

Hope Sears Doane Howes Chase died 2 May 1816 at Harwich. She was 85 years old. She is buried in the North Harwich cemetery, also called the Old Baptist Cemetery, with the inscription reading 24 May rather than 2 May:
"In memory of Hope Chase wife of Job Chase who departed this life May 24 1816 in the 86 year of her age". By I.C. Esq. 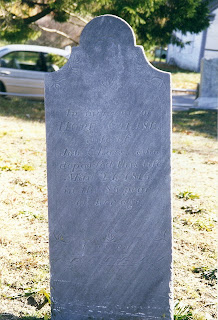 Sources Not Included Above:

James W. Hawes, Thomas 1 Howes of Yarmouth, Mass., and Some of His Descendants, Together with the Rev. John Mayo, Allied to Him by Marriage, Library of Cape Cod History and Genealogy, No. 31, 1917

The Sears Family Association database: http://www.searsr.com/index.htm
Posted by Chris at 10:25 AM No comments: