John Holmes was baptized 22 February 1603 (/04?) at St. James, Colchester, son of Thomas Holmes. He is my 10th great-grandfather on my grandfather Arthur Washburn Davis’ side of the family. Research by Denwood Nathan Stacy Holmes, published in The Register, Spring 2017 (see Sources below), shows that John was the son of Thomas Holmes, gentleman and maltster of Colchester, Essex. Thomas’ 1637 will leaves bequest to Thomas son of “my son John.” In the margin is an additional bequest to son John five pounds and corslet and pike and all armor. There is no mention of specific burial instructions, typical of non-conformists. In a 1627 document, Thomas Holmes is referred to as a gentleman and a gaoler of Colchester Castle.
Thomas Holmes’ daughter Susan (Holmes) Morton’s 1652 will, proved in 1656 at a Canterbury court, leaves bulk of her property to her nephew Thomas “eldest son of my brother John Holmes” and leaves bequests to two more nephews, also sons of John: John Holmes, age 21, five pounds; Nathaniel Holmes, age 21, two pounds. She also directed nephew Thomas to pay five pounds annually to his father John Holmes.
Susan Holmes married Tobias Morton/Moreton, a well-educated lawyer, whose 1629 will was witnessed by Thomas and John Holmes.

John migrated to Plymouth in 1632 and was admitted freeman there 1 Jan 1634/35. He served as a messenger for the General Court (later a position called marshal, still later county sheriff).  John was presented at court for taking five shillings for serving a warrant, staying up at night drinking “inordinately” while on public business and for abusing other men’s names to procure money to use for drink.  He was cited other times for drunkenness including on 1 April 1633 when he was sentenced to sit in the stocks and fined 20 shillings.
He is an interesting man! His government position and being referred to in records as “Mr.” and sometimes gentleman indicate some standing in the community and also that he was literate. Conversely he is frequently cited for drunkenness.

John also served on juries and was on the Plymouth list of men able to bear arms in 1643. He owned a house and land adjoining Reed Pond, purchased from William Palmer in 1632. He also received hay ground from the town and was granted 40 acres of upland at Narragansett Hill living between the highway and Derby Pond. If anyone can use the mention of these ponds to pinpoint where John Holmes lived, I would very much appreciate hearing from you!

He married Sarah whose maiden name is unknown.  Since there was a large gap between the first and second child’s birth, perhaps John married twice, both times to women named Sarah. Children:

I descend through Nathaniel who married Mercy Faunce.  Please note that Robert Charles Anderson writes that Nathaniel is probable son of John and Sarah. Historian and author Susan Roser has written there is enough circumstantial evidence that Nathaniel was John’s son. This is the only Holmes family in Plymouth in which Nathaniel could be placed; his age is the right fit for this family; he and John 2 Holmes married sisters; and naming patterns of their children (Nathaniel named children John and Sarah; John 2 married children John and Nathaniel).  More recent research by Denwood Nathan Stacy Holmes finds John Holmes’ sister named nephews Thomas, Nathaniel and John in her will.

William Spooner of Colchester, Essex, indentured himself to John Holmes of New Plymouth in America, gentleman, for a term of six years beginning in 1637, then that same year his indenture was transferred to John Coombs of Plymouth. John also took Dorothy Temple (and her illegitimate child) into service in 1639, taking over her agreement from Stephen Hopkins for a payment of three pounds.

In 1642 John Holmes was paid 3 pounds 10 shillings for boarding Thomas Granger, a teenager sentenced to death bestiality (who is my 11th great-uncle), and for executing Granger by hanging, and then killing eight animals Granger allegedly made unclean. Wish I didn't discover this fact about John Holmes.

John Holmes died after 3 June 1652 (date of his sister’s will which implies he was alive). It is possible he returned to England, but more research is needed.

House Location of William and Mary Brewster of Plymouth, Mass.

William Brewster came over on the Mayflower and was one of the more influential members of the Pilgrim contingent and served as a spiritual advisor. He was born about 1567 at Scrooby, Nottingham, and married Mary (maiden name unknown) who was born about 1593. They are my 10th-great grandparents. William and Mary had six children: Patience, Jonathan, Fear, Love, Wrestling and an unnamed children who died young. I have lines of descent from Love, Fear and also from Patience. I've written more about William and Mary Brewster here.

I recently took photographs of the William and Mary's Plymouth house location. Mary died in Plymouth in 1627. William moved to nearby Duxbury where he died in 1646. 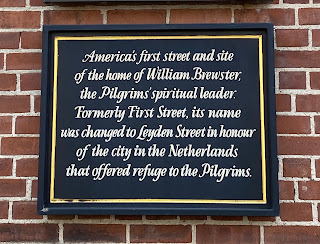