Peter Worden was an early settler of Yarmouth, Mass., in an area that later became East Dennis. He was from Clayton, Lancaster County, England, and was born there in 1569 (date on memorial stone). Peter is my 11th great-grandfather.

Nancy Thacher Reid wrote that he probably came on the ship Little James in 1624 (this is according to family genealogist Leslie E. Worden).

He was considered an elder when he "excepted to" by court in early 1639. He died that same year. Reid also wrote that the Worden family was already in Yarmouth when the official plantation began in 1638/39, as early as 1626.

His wife’s name is unknown; they had a son Peter Worden and likely a daughter whose name I have not found. I wrote about him here.

There isn’t a great deal known about Peter.

On 7 January 1638/9 land granted at "Mattacheeset, now called Yarmouth," to Mr. Anthony Thacher, Mr. Thomas Howes, Mr. John Crow, and John Coite. (Coite may have been from Marblehead but did not move to Plymouth Colony.) Crowe, Thacher, Howes, along with Marmaduke Mathews, Philip Tabor, William Palmer, Samuel Rider, William Lumpkin and Thomas Hatch were named freemen of Yarmouth. It was noted that "Old Worden (dead)", Burnell, Wright and Wat Deville were "Psons there excepted against," probably meaning they were not eligible to be freemen and shows that some form of settlement had already been in existence.

The Cape Cod Genealogical Society Bulletin, Spring 2002, published a letter from Peter R. Worden of Lancashire, England. Peter died in February 1639 and would almost certainly have been buried on the 12 acre plot on which he and his family were possibly squatting before Yarmouth officially became a settlement, at the West Field (a piece of land already cleared by Indians) at Yarmouth Port, in the area of the present "disused" Railroad Station. There is a tradition that the Worden family came down from Lynn, Mass., but the letter writer believes this is a myth. Peter’s mother was Isabel Worthington of Blainscough Hall, a gentry home, between Standish and Chorley. Peter likely knew Miles Standish and that is how he came to New England as no other motivation for emigration seems to exist. Writer would guess they lodged first at Duxbury then went to Yarmouth. After his father's death, Peter the younger got married and their first child arrived around 1640.

Swift wrote that when he died in 1639, he was probably the first white settler to die at Yarmouth.

Peter Worden’s will was dated 9 February 1638/9, witnessed by Nicholas Simpkins, Hugh Tilley and Giles Hopkins (latter two were Mayflower passengers). No mention of his wife, so she must have predeceased him. It mentions only his son Peter Jr and John Lewis, who appears to be his grandson so he must have had a daughter who also predeceased him. His estate included land in the town of Clayton, Lancaster, England, as well as his Yarmouth land. His homestead was in the present village of East Dennis along Route 6A overlooking Sesuet Creek and extending south from 6A quite some distance.

The last will and testament of Peter Werden, of Yarmouth, Ye elder deceased proved at ye General Court held at Plymouth, the 5th day of March, in  ye 13th year of ye reign of our sovereign Lord  Charles I, King of England, etc., 1638, by ye oathes of Mr. Nicholas Sympkins,  Hugh Tillie, & Giles Hopkins - as followeth.

Be it known unto all men to whom this doth or may concerne, that I, Peter Werden, of  Yarmouth, in New England, in the Plymouth Patten being very sicke, in this yeare of  our Lord 1638, and on ye 9th day of February, do make my last will to testify unto all that I, Peter Werden, do give and bequeath unto Peter Werden, my only sonne and heir, and in the presence of Nicholas Sympkins, Hugh Tillie, and Giles Hopkins, I do make him my whole executor, to whom I do give all my lands, leases, tenements with goods moveable and unmoveable in the town of Clayton in the county of Lankester. Likewise do I give unto Peter, my sonne, all my goods which I have at this present in New England. My will is my sonne is to give to John Lewis one nat goat, also my will is my sonne is to give my grandchild such money as is due for the keeping of goates and calves until this day and that my sonne is with the money to buy John a kid to dispose it otherwise for his use. Also one bed or bolster, 3 blankets, also my sonne is to have the tuition of my grandchild until he be at the age of one and twenty years of age, also my will is he shall fynd him with meate, drink and clothes, and at the three last years of the 21 years also to have 40 shillings the year after and above, for to add to his stock with a sowe pigg when the sowe piggs.

In witness we present set our hand

He is buried near Worden Hall, Route 6A, East Dennis, in the Worden Family Cemetery (previously Homer Cemetery). Peter’s son and daughter-in-law likely buried there as well. Worden Hall was a social center for the village in the 1800s, named after the Worden’s who first owned the land on which it sits. It is now privately owned.

There is a slate marker with bronze plaque that is a memorial to Peter, his son and daughter-in-law. Partial inscription: Peter Worden 1569-1639. 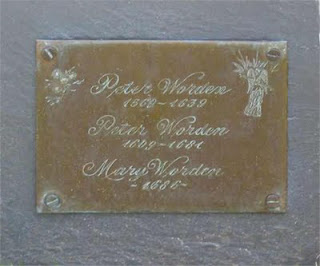 He married in January 1615/16, Jane Woolstone, at St. Saviour’s, Southwark, Surrey, England. (Marriage license date 22 January 1615/16). He is my 10th great-grandfather on my grandmother Milly (Booth) Rollins’ side of the family. I have not yet researched Jane Woolstone’s ancestry.

He was from London and a goldsmith by trade. He immigrated to the Massachusetts in 1633, first settling at Lynn. He had a child born London in June 1633 and was a freeman in Lynn in 1634, so may have come on the Griffin in 1633.

Henry had nine children with Jane (London church records from NYGBR 86:209-10) but only three outlived their parents:

I descend from Elizabeth whom I wrote about here.. After all the loss Jane and Henry suffered, their youngest recorded child, Elizabeth, lived to age 87.

Henry was one of the original settlers of Sandwich, Mass, the oldest town on Cape Cod. On 3 April 1637, the Plymouth Court granted permission of the ten men of Saugus to settle at Sandwich (then Shawme).

"It is also agreed by the Court that those tenn men of Saugust, viz Edmund Freeman, Henry Feake, Thomas Dexter, Edward Dillingham, William Wood, John Carman, Richard Chadwell, William Almey, Thomas Tupper & George Knott shall have liberty to view a place to sitt down & have sufficient lands for three score famylies, upon the conditions propounded to them by the Governor and Mr. Winslowe."

It appears that Henry didn’t move to Sandwich until 1639 as he served on an Essex jury in 1638. On 25 Sept 1639 "Mr. Henry Feake, of Sandwich," assigned to John Barnes of Plymouth the remainder of the term of his servant Edmond Edwards.

Requested admission as Plymouth freeman 4 June 1639 (PCR 1:126); although there is no subsequent record of the admission of Henry Feake, a "Mr. John Feake, of Sandwich" was made freeman on 7 June 1642 (PCR 2:40). There was no adult John Feake at Sandwich at this time, and so this record must be for Henry.
Henry Feake served on a Plymouth grand jury in 1642. He was a Sandwich Deputy to the Plymouth General Court in 1643 and 1644.  He was listed in the Sandwich portion of 1643 Plymouth list of men able to bear arms.

On 16 April 1640 Henry Feake was appointed to a committee to resolve a dispute over Sandwich meadow lands, and in the resulting resolution he was awarded 20 acres of meadow, with another acre given to "Mr. Feak's house.”

On 20 May 1640 "Henry Feake of Sandwich, gent." granted to "my loving brother George Feak of Wightin," Norfolk, gent., "my new house" with "all the upland and meadow ground wich appertains and belongs unto me excepting two acres of upland (and) one acre of meadow.”

Henry died between 24 Sep 1657 (date of will) and 02 Apr 1658 (date of judgment), probably in Newtown (now Elmhurst), Long Island, New York. He had moved there by 1656 (Lovell writes he moved in 1652). He was one of the parishioners who followed Rev William Leverich to settle there.
On 2 April 1658 "judgment in the case of the heirs of Johanna Wheeler vs. the heirs of Henry Feaks, husband of said Wheeler; annuls the will of Feaks, and directs that the property of both the deceased persons be inventoried and appraised, and after paying their debts, be equally divided among their surviving children" (Calendar of  Historical Manuscripts in the office of the Secretary of State, Albany, NY Part 1, Dutch Manuscripts 1630-1664, ed. Edmund B. O'Callaghan (1865) p 194, citing 8:801 of the Dutch Manuscripts). This document was partially burned in the 1911 fire in Albany, but reveals that Feake had three children by a previous marriage and Wheeler had two children by a previous husband. The annulled will of Feake was apparently dated 24 Sept 1657 (NYGBR 86:209).

From above we see that Henry Feake was survived by three children, one of whom would be daughter Elizabeth who married John Dillingham. Unless there were children born but unrecorded after the family arrived in New England in 1633, the second and third must be tow of these three children: John, Jane, Mary.

On 1 March 1670/1 "John Feake of Wighton, Norfolk, gent., son and heir of George Feake, late of Wighton aforesaid, gent., deceased" sold to Robert Harper of Sandwich "all those the houses, lands, tenements, meadows, pastures, uplands, hereditaments of him the said John Feake and late of George Feake his said father deceased, which did sometimes belong and appertain to one Henry Feake, brother of the said George Feake."