Hugh Stewart was an early settler in Chatham, Mass. I don’t have much information on him—where he’s from or any definite birth or death dates. I do know he was a farmer and that it was likely he was literate as his inventory included books. In records he is sometimes referred to Ensign, so he did serve in the local militia. He is my 8th great-grandfather on my grandmother Milly Booth Rollins’ side of the family. His last name is spelled in a variety of ways including Steward, Stuard and Stuart. 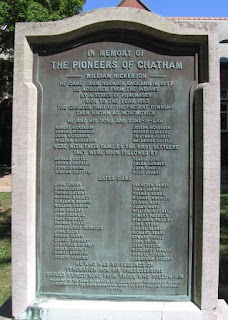 He married Waitstill Deane, their marriage recorded Yarmouth Vital Records, but page is torn. Says Hugh Stuard was married to Watestill (Wate written over Hope) Deane the 13th (torn). First entry on the page; the next entry is also torn ____ary 72 (1672). So I would guess they were married on the 13th of January or February in 1672. I haven’t found Wait’s parents, although I have read she was born Yarmouth 1652, daughter of Robert and Mary Denne/Deane, but without source.


Possibly also had a son John (not mentioned in will and birth not recorded).

I descend from Joseph who married Mary, whose maiden name is unknown.

Description of Deacon Samuel Taylor's land at West Chatham mentions it was bound on the west by Hugh Stewart's farm.

Hugh Stuart of Monomoy aka Chatham with three others petitioned the General Court that “lands purchased of the Indians John and Josephus Quason in 1694, called Monomoy Beach, with some pieces of meadow, etc., may be confirmed to them.”
Barnstable Co. Probate 3:307: Hugh Stuard of Monamoy (Chatham) wrote his will 5 March 1710/11. He asked that his funeral charges and debts be paid. Left to his loving wife Weit Stuard his dwelling house, lands and meadows. If she remarries, to get one third. After her death, three sons, Joseph, Ebenezer and Samll to receive equal parts, some already lotted out to Joseph. He bequeathed 10 shillings to each of his daughters and his grandchild Lydia Covell. Mentions he already gave land to son Michael Stuard. After his wife’s decease, his sons were to pay daughters as follows: Temperance Stuard, 10 pounds; Catom Nickerson 5 pounds; Joanna (no last name given) 5 pounds; Marcey Hall 8 pounds; Grandchild Lydia Covell 5 pounds. Named son Joseph his executor. Signed by his mark. Witnessed by Mary Doane, Joseph Doane Jr., Mary Doane Jr.

The Pilgrims and Natives First Encounter

In Governor William Bradford’s account of the Pilgrims’ arrival in America, Of Plymouth Plantation, he described the first extended contact between the recently arrived Mayflower passengers and a group of Native Americans (believed to be Nausets). On December 7, 1620, a group of men, led by Captain Myles Standish, left the Mayflower as it was anchored off Provincetown for some exploration and foraging. The next morning, they were surprised by a group of Native Americans—arrows flew and shots were fired, but no harm resulted. They had experienced a long night pierced by the “hideous and great cry” of what seemed to be “a company of wolves or such like wild beasts.” In the early morning, the exploring party was confronted by another “great and strange cry, which they knew to be the same voices they heard in the night.” This time, however, a returning scout exclaimed that the voices were not animals but “Men, Indians! Indians!” 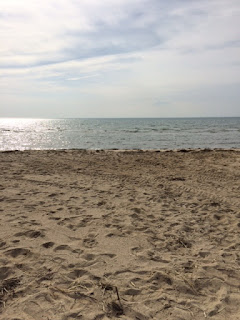 The Pilgrims’ superior weaponry eventually enabled them to chase off the Natives, but Bradford attributed the victory to a different source:
Thus it pleased God to vanquish their enemies and give them deliverance; and by His special providence so to dispose that not any one of them was either hurt or hit, though their arrows came close by them and on every side of them; and sundry of their coats, which hung up in the barricade, were shot through and through. Afterwards they gave God solemn thanks and praise for their deliverance, and gathered up a bundle of their arrows and sent them into England afterward by the master of the ship, and called that place the First Encounter. 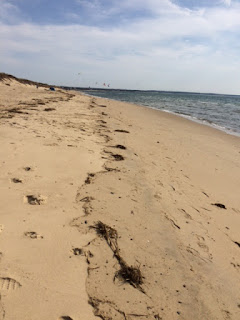 This First Encounter took place at what is now called First Encounter Beach in Orleans on Cape Cod. I’ve been curious to see the spot and stopped there while on the Cape last weekend. I was struck by what a beautiful and peaceful spot it is—there were wind surfers in the distance and a few people walking their dogs or sitting and enjoying the sun and bracing sea air. It is hard to imagine it as the site of such a violent exchange. There is a stone with a plaque attached identifying it’s history, but the plaque is now hard to read. 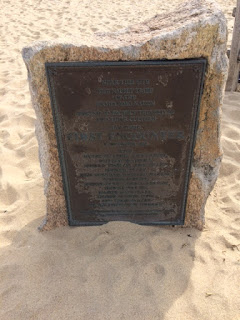 
There is (or was) another plaque at the site which I did not see on my visit, shown on the postcard below.

I had my seven-month old grandson with me and it was his first encounter with a beach. Gave me a bit of a thrill! I’ve certainly turned into a history/genealogy nerd! 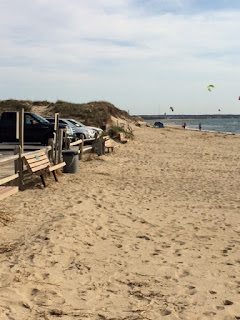 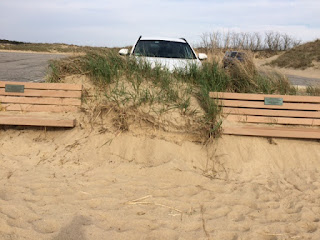 
Austin (also seen as Augustine) Bearse (also seen in many other variations including Bearce) was born ca 1618, possibly in or near Southampton, England. He may be my 11th great-grandfather on my grandmother Milly (Booth) Rollins’ side of the family. I need to do more research on this connection.

He immigrated at age 20 on the ship Confidence of London, leaving Southampton, England on 24 April 1638. He came to Barnstable with the first company in 1639 and was admitted freeman there in May 1653. He was a member of Rev. Lothrop’s church and listed as a member there on 29 April 1643. His name rarely occurs in records, which shows he wasn’t overly involved in public service but that he also wasn’t the subject of legal squabbles which were so common. He served as a grand juror in 1653 and 1662 and a surveyor of highways in 1674.

His wife’s name is not known, but some say her first name was Mary.

The couple had 11 children, born and recorded in Barnstable:

I descend from his daughter Priscilla.

There have been stories that Austin was a Gypsy (his mother called a gypsy princess) and that he was deported as a criminal from England. The story goes that none of the white women were interested in him because of his dark skin, so he married Native American Princess “Little Dove” Hyanno, daughter of Chief Iyyanough. This is always a subject that gets a lot of people fired up, as they strongly believe the legend or feel it’s just a myth. It seems to me that since he was a church going man, living in Barnstable, with children who married into the best English families, that it is impossible he was a gypsy and his wife was a Native American. Whenever I read “princess” to do with an ancestor, I immediately see red flags. There is also no evidence the ship Confidence held any prisoners. The early settlers weren’t exactly an open minded lot and wouldn’t have accepted a gypsy who married a Native American, who by the way was a criminal, into their church and community!

The Cape Cod Genealogy Society Bulletin, Spring 2003, has a map showing locations of first century houses in the town of Barnstable which shows the home of Austin Bearse, a full Cape, at 38 Church Hill Road, Centerville. A post on geni.com says the house still stands but I’ve also read that only the house cellar and remains of an orchard mark the site. A walking map of historic Centerville by the Centerville Historic Society Museum does indicate the house at 38 Church Hill Road was built by Bearse ca 1686, which would've been very late in his life. Something I need to investigate further. A road from his house to Hyannis is still called Bearse’s Way. His house lot contained twelve acres of rocky land  and was in the westerly part of the East Parish. He also owned six acres of meadow and two thatch islands.
There is no record of his death or estate settlement, but he Otis wrote he was living in 1686 and died before 1697.
I haven’t read it, but researcher Dale Cook said there is a thorough but hard-to-find work on this family is an unpublished typescript by Fanny Louisa (Steed) Meadows, assisted by Jennie M. Ames, Genealogical Records of Austin Bearse (or Bearce) of Barnstable, Cape Cod, Massachusetts, U.S.A. A.D. 1638 to A.D. 1933 ... (Cleveland, OH: 1933; Supplement 1939).