Seth Pope was born 5 April 1689 at Dartmouth, Bristol County, Massachusetts, the son of Seth Pope and Deborah Perry (NEHGR 2:69, 1869). Seth the elder was quite interesting; I wrote about him here. Seth the younger is my 8th great-grandfather on my grandfather Arthur Washburn Davis’ side of the family.

Seth married Hannah Bourne on 12 January 1709/10 in Sandwich. She was born 4 May 1689, the daughter of Elisha and Patience (Skiffe) Bourne. I wrote about Elisha here.  Seth’s brother, John, married Hannah’s sister, Elizabeth Bourne.

Children of Seth and Hannah Bourne are recorded in Sandwich Vital Records or proven by baptisms:

I descend through John Pope and his wife Mercy Swift.

Seth’s father purchased a great deal of land in Sandwich Village and gave parcels to his sons Seth and John. Seth’s home is at what is now 10 Grove Street. The house is still standing and is on a stunning piece of land.  Seth operated (later was bequeathed ownership from his father) a grist mill, fulling mill and weaveshop.

His father Seth’s will has an unusual stipulation that in case he did not keep the works in proper repair, the executors were from time to time, as found necessary, to take charge of and repair them, and operate them until the expenditures had been repaid. In October, 1734, we are told that “a committee waited upon the miller, Mr. Pope, to know if they could not be better served in grinding their corn.” Perhaps Seth Junior didn’t inherit his father’s strong work ethic!

Seth Pope died 23 November 1744 at Sandwich. He is buried there at the Old Town Cemetery. He was 55 years old. 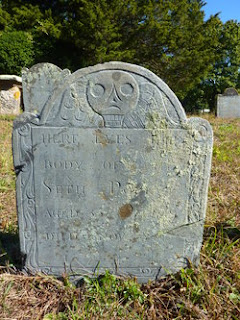 Susan Roser treats 27 Mayflower families in this book, covering the first three generations of descendants. Birth, marriage and death dates are provided when known, as well as epitaphs and obituaries. She also includes a Probate Index for each family to assist the reader in identifying fourth and fifth generation children. Sources are cited throughout and it is fully indexed.

Appendices include Gov. Bradford’s list of Increasings and Decreasings of Mayflower passengers and the 1627 Cattle Division. 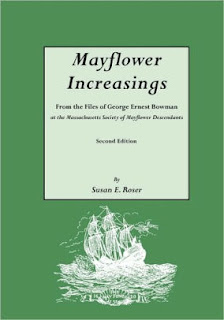 Research on Mayflower passengers is never-ending, so there have been some discoveries since this book was published (such as the maiden name of Richard Warren’s wife Elizabeth), so hopefully there will be a third edition published. The only criticism I have of this book is that the type is quite small.

Genealogical Publishing Company provided me with a copy of this book to review.