Book Review: The Planters of the Commonwealth of Massachusetts, 1620-1640, by Charles Edward Banks

I find a genealogy book that is referred to by the author’s last name rather than the book title to be a good addition to my personal library. I hear “Torrey,” and I know the reference is to Clarence Almon Torrey’s New England Marriages Prior to 1700. For me, Banks falls into this category because his work has been so well regarded for 90 years.

The Planters is a study of emigration in colonial times (1620-1640). It includes lists of passengers to Massachusetts (including Plymouth Colony), the ships which brought them across the sea, passenger place of origin when known, and the initial place settled in Massachusetts. It includes the names of 3,600 passengers on nearly 96 ships. It is the most complete and authoritative collection of passenger ships from this period ever published. The book has invaluable indices of surnames, place names and ship names.

Banks’ preface clarifies the use of the word “Planter,” which during this time was used not in an agricultural sense, but rather they were men (and often their amilies) who came to “plant” an English colony.

This book, however, is not just passenger lists. In one section Banks breaks down the immigrants by county of origin, with Sussex having the heaviest emigration. One interesting example is the parish of Hingham in Norfolk only had a few hundred families, yet 35 families migrated to found the town of Hingham, Massachusetts.

Another aspect of this book I appreciate is that Banks includes information on ships even when the passenger list is unknown. If you have a rough idea of when your ancestor migrated, you can come up with some possibilities by perusing the book.

In my research I often see the ship and year an ancestor emigrated, but Banks often fleshes that out with other facts such as the master of the ship, where it departed from, and length of the voyage. It is also worthwhile to look at a passenger list to see other surnames that might be connected to your family. I made a great discovering reading the book…the name of a 9th great-grandmother I have long-neglected jumped off the page. She was listed with her unknown (to me) parents. Bingo!

There is nothing fancy about my copy of The Planters from Genealogical Publishing Company which gave me the book to review. It has a basic paperback binding. I prefer genealogy books in printed format rather than reading it on my computer or phone screen. An exception is for massive works such as Torrey’s 12-volume New England Marriages Prior to 1700, which I prefer to reference online! Genealogical Publishing offers family historians a way to obtain genealogy and local history books at a reasonable price. For instance at the time I write this an online bookseller is selling a 1930 hardcover of the Planters for $90 plus shipping. Genealogical Publishing sells a paperpack copy for $31, or you can purchase an eBook version at a lower cost.

Please comment with your go-to books for New England research!

John Chase was born 6 April 1649 in an area of Yarmouth that is now Dennis, Barnstable County, Massachusetts. He was the son of William Chase.* He is my 8th great-grandfather on my grandmother Milly (Booth) Rollins’ side of the family. Whenever I write about my Baker and Chase families, I feel I should put an asterisk after each of their names. I never feel confident I have their information completely correct since they were so plentiful and confusing!  Please consider this sketch a work in progress.

John Chase married Elizabeth Baker (date unknown but Torrey gives as by 1668 when first child born). Elizabeth was the daughter of Francis Baker and Isabel Twining, born about 1648, and was also of Yarmouth (now Dennis which spun off from Yarmouth in 1793), Massachusetts.  I have read John was a Friend, or Quaker, but need to do more research.

John and Elizabeth lived in what is now Dennis Port where they raised their children:

Vernon Nickerson and others have Jeremiah O’Killia/Kelley’s wife Sarah as daughter of John Chase, but I have not found proof of this.

Unfortunately some of the records of his children’s births are worn so all of their identities aren’t known with certainty.

In the way only cozy places like the Cape offer, I descend from three of John and Elizabeth Chases’ children: Thomas, Isaac, and William. If Sarah, wife of Jeremiah, is found to be a daughter of John, then that would make four.

John Chase built a homestead on the east shore of Swan Pond in what is now Dennis Port. Nancy Thacher Reid writes its location can still be located, marked by a huge clump of lilac bushes. He was allowed by the town to have meadow along Herring River.

In 1676 he had taxable property worth 12 shillings, 4 pence. He received multiple land grants in Yarmouth/Dennis.

John served in King Philip’s War and received one pound, four shillings for his service. His name was on the List of the Soldiers of Yarmouth who went to Mount Hope under Capt. John Gorham against the Indians in 1675, and took their first march upon the 24th June, 1675.  John Chase was among others in an expedition that same month to repel an expected attack on Swansey. In 1713 he received twenty-two shares in common lands.

In 1727, John Chase (or his descendants) received a land grant in what is now Maine for his service in the war.

I have not found death records or probate in Barnstable County for John and Elizabeth. Some descendants have Elizabeth Baker Chase’s death as 16 May 1706 in Swansea, Bristol County, Massachusetts, but I haven’t found that record yet. John and Elizabeth’s son John lived in Swansea, so there is a connection to the place. I have seen other researchers give John’s death as 1684 and about 1718, but again without a source.

*Some descendants have John’s mother was Elizabeth Holder, a second wife of William Chase; others claim his mother was Mary who was a Native American. I have not found evidence for either of these claims, although the latter would be hard to prove.

George Walter Chamberlain compiled for John Carroll Chase, Some of the Descendants of William Chase of Roxbury and Yarmouth, Mass., NEHGR, January 1933

Book Review: A Stranger Among Saints by Jonathan Mack

I'm going off in a different direction, offering my opinion on a book, something I'll be doing as a change of pace from time to time. A Stranger Among Saints: Stephen Hopkins, the Man Who Survived Jamestown and Saved Plymouth, by Jonathan Mack, Chicago Review Press, 2020.

Mayflower passenger Stephen Hopkins is one of my favorite ancestors. There has been a fair amount written on him that shows him to have been adventurous, intelligent, strong in his opinions, and open-minded for the times. He even inspired Shakespeare’s Tempest! I dragged my heels about purchasing Jonathan Mack’s book because I was doubtful he could possibly offer anything new about Stephen Hopkins. A cousin suggested I read it, so I stopped procrastinating and ordered it through Amazon. I’m very glad I did! I’ve long felt Hopkins does not get credit for his important role in the founding of Plymouth (he was the only passenger who knew about the Algonquian culture and language from his time at Jamestown), and Mack does much to solidify Hopkins’ position in history. If you are not familiar with Stephen Hopkins, you can read a sketch I wrote about him here.

Jonathan Mack gives a good deal of credit to Hopkins for saving the struggling colony, decimated by loss of life during the first winter. If not for help from Native Americans, it’s possible no one would have survived. Hopkins was the only colonist who welcomed Abenaki sagamore Samoset to stay in his home, a move that may well have saved the colony. He served as a bridge between the Natives and the Colonists throughout his life.

Because he participated in an insurrection after being shipwrecked on Bermuda, the author argues Hopkins would have had significant input into the Mayflower Compact, the first written constitution in the New World,

The author shows Hopkins that doesn’t get the credit he deserves because he didn’t play by the rules, often finding himself on the wrong side of popular (pious) opinion and sometimes the law itself. Even though he was a “stranger” and not a Separatist “Saint,” he won their favor early, serving in a variety of capacities including Assistant Governor. He eventually fell out of favor because of his penchant for not following rules and getting in trouble with the law.

Mack’s writing style is very readable and the 272 pages are a quick read. For anyone with Mayflower connections or an interest in the early history of our country, reading this book is time well spent. 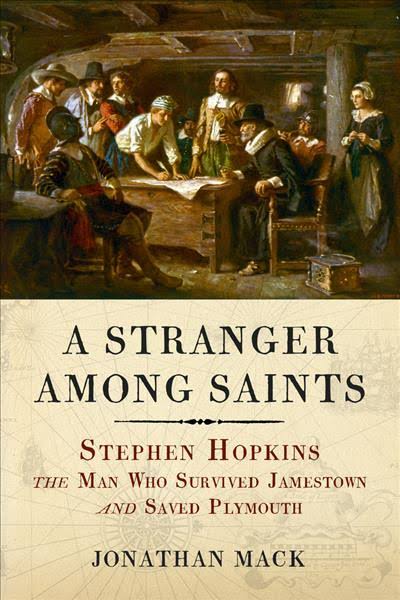