Giles Hopkins came to Plymouth Colony as a boy of about 12 on the Mayflower with his father Stephen, step-mother Elizabeth, sister Constance, and half-sister Damaris. His half-brother Oceanus was born during the passage. Giles is my 11th great-grandfather on my Grandmother Mildred (Booth) Rollins’ side of the family. His name is also spelled Gyles in records. I wrote about his father Stephen Hopkins here.

Giles was born in Hursley, Hampshire, England before 30 January 1607/08, when he was baptized. Caleb Johnson found the record, which is written in Latin. The Latin version of his name is Egidius.

In 1637 the Pequots, a tribe of from Eastern Connecticut, commenced war with the English there, and Plymouth Colony decided to send a company to assist in the overthrow of the Indians. Giles and his father and brother Caleb volunteered to go out in the company, but before they left the Connecticut men overthrew the Indians so they were not needed.

Giles moved to Yarmouth in late 1638 or early 1639. It is supposed when his father Stephen Hopkins in obtained land to winter his cattle at Yarmouth, then Mattacheese, that Giles went to care for the cattle. Giles was in Yarmouth in 1639 when he, along with Hugh Tilley and Nicholas Sympkins "deposed" to the last will and testament of Peter Warden, the elder, Giles lived in an area of a cluster of homes called Stony Cove, Mill Pond (not the Mill Pond off Follins Pond). It is believed that his home was the first English house to be built below Sandwich. He sold the homestead to Andrew Hallett Jr. in 1642.

Giles wasn’t a Yarmouth resident for long, but he was there long enough to become acquainted with his future wife Catherine Whelden.

Giles and Catherine were married at Plymouth on 9 October 1639. Giles was about 31 years old. Catherine was the daughter of Gabriel Whelden of Malden and Yarmouth. She was born before 6 March 1616/17, when she was baptized at Basford, Nottinghamshire, England.

In 1641, Rev. Lothrop wrote in his diary that Barnstable constable William Carsley was excommunicated from the church because he made homosexual advances toward Giles Hopkins on three separate occasions.

Giles and Andrew Hallot were surveyors in Yarmouth in 1642. In that same year, Giles successfully sued Walter Devell for non-payment for nine bushels of corn. He was not listed on Yarmouth's men able to bear arms in 1643, so he had likely moved to Barnstable by that time.

Giles and Catherine moved to Nauset (Eastham) by 1650, as he was then occupying the position of surveyor of highways, which he served again in 1662 and 1671. He served on a jury in 1667, when a child kept by John Smalley was found dead in the woods. They lived along what is now Tonset Road in Orleans near Town Cove and stayed there for the rest of their lives. Giles' sister Constance and her husband Nicholas Snow also lived in Eastham.

Giles and Katharine had 10 children, with two dying in infancy. Their births were recorded at Eastham, although some were born earlier in Yarmouth:

I descend from their daughter Deborah Hopkins. Her husband Josiah was not a descendant of Francis Cooke of the Mayflower, although I descend from Francis through a different line.

For some unknown reason his father made Caleb, his younger son by his second wife, heir apparent in his will, giving Caleb all of his real estate. Giles did receive his father's "great bull." Soon after his father's death in 1644, Caleb gave a very large tract of land to Giles, his only surviving brother, in what is now Brewster. Upon the death of Caleb, who was a seaman who died unmarried at Barbados before 1657, Giles came into possession of large tracts of land.

In 1659 Giles had land granted him at Eastham. In 1662 he was given liberty by the court to look out for land for his own between Bridgewater and Bay Line. In 1672 he purchased Sampson's Neck in what is now Orleans, then called Indians Weesu Neck, with Jonathan Sparrow and Thomas Mayo. It was a valuable piece of land as it was between Higgins' River on the north and Potonumecot River on the south.

On 15 June 1653 he and Nicholas Snow (his brother-in-law) laid out 20 acres of meadow to settlers; he received 3 acres. He relinquished land on west side of Stony Brook, Harwich 25 February 1768 because of border dispute with Yarmouth. The east boundary line was determined in 1682 by agents, included Giles.

Historians have surmised that Giles was a quiet, private man, caring little for public positions. He was in 1654 drawn into a lawsuit by the noted William Leveridge, who had defamed him. Giles claimed damages to the amount of 50 pounds and Leveridge was ordered to pay 2 pounds and some shillings for the offense.

Giles died in Eastham between 5 March 1688/9, when he wrote a codicil to his will, and 16 April 1690, when his will was proven. He would have been in his early 80s. His will is recorded in the Probate Records of Barnstable County, Vol I, page 32 and has been printed in the Mayflower Descendant. He did not leave bequests to any of his daughters, although some of them were still living.

He left upland and meadow at Satuckit in Eastham to son Stephen, as well as half his livestock. He also instructed the other half of his stock of cattle be used to maintain son William Hopkins during his natural life in a comfortable decent manner, which seems to indicate William had a physical or psychological challenge.

Sons Caleb and Joshua were to receive lands at Palmet (Pamet) and at Samsons Neck, equally divided.

Giles left his house and half the land and half the orchard to his wife, which was to to go to son Joshua at her death. The other half of the land was to go to Joshua at time of Giles' death. Also left plow irons to Caleb and Joshua, cart and wheels to Joshua, other half stock and moveables to wife and son William.

He appointed Stephen Hopkins as his executor. Witnessed by Jonathan Sparrow and Samuel Knowles.  Bore Giles' mark with a seal.

Codicil written on 15 March 1688/9 asked that because of his age and disability of body that he could not provide for his own support and that of his wife, so that his son Stephen Hopkins shall possess and enjoy all stock and moveable goods provided he take care of his parents' care during their natural lives. Witnessed by Mark Snow and Jonathon Sparrow.

Giles Hopkins is buried at Cove Burying Ground in Eastham, but without a surviving headstone. There is a memorial stone placed there by his descendants in 1966. It is not known when Catherine died but it was after March 1688/89, when she was named in her husband’s will. 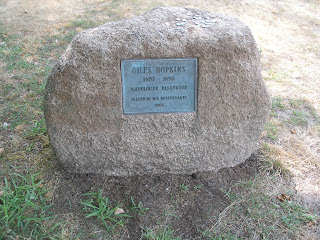 Descendants of Giles Hopkins may be interested in learning about the Pilgrim Hopkins Society at pilgrimhopkins.com.
Sources Not Listed Above:
John D. Austin, Mayflower Families Through Five Generations Stephen Hopkins, 1995
Caleb Johnson, The True Origin of Stephen Hopkins of the Mayflower, The American Genealogy, July 1998
Robert Charles Anderson, The Great Migration Begins, 1995
Marion Vuillieumier, The Town of Yarmouth, Mass., A History, 1989
Josiah Paine, Early Settlers of Eastham, Book 2, Library of Cape Cod History and Genealogy, No. 32, 1916
Roger King,Cape Cod and Plymouth Colony in the 17th Century, 1994
Posted by Chris at 3:21 PM 10 comments:

Eleazer Kelley was born 1 November 1728 in Yarmouth, Massachusetts. Eleazer lived in a part of Yarmouth that became the town of Dennis in 1793. He is my fifth great-grandfather on my Grandmother Mildred (Booth) Rollins’ side of the family. He descends from David O’Kelia, the first of the Kelley name to live in the area in the 17th century. Eleazer’s line of descent from David is Eleazer3, Jeremiah2, David1.  I spell the last name “Kelley" for consistency but it was often spelled Killey in records pertaining to Eleazer.

When he was 20 years old, Eleazer married his first cousin Hannah Baker on 9 February 1748/49 in Yarmouth (now Dennis). Although we now frown on marrying first cousins, it wasn’t unusual then as people were living in fairly isolated villages with a limited number of candidates of the same religious and social class.

Hannah was born Yarmouth 12 January 1728/29, the daughter of Silas and Deliverance (Kelley) Baker.

I descend from Elihu Kelley, whom I wrote about here.   My research on the rest of the children is still a work-in-progress; I’d love to hear from any of their descendants.

Eleazer lived in the area that is now West Dennis, near the Bass River. Several of his sons, including Elihu, stayed on the land and ran a ferry across Bass River to Yarmouth.