I recently visited the Wadsworth Atheneum, a beautiful art museum in Hartford, Connecticut. I had read that the museum owned the Howes-Prence Court Cupboard that was once part of Wallace Nutting's collection of early American Furniture. When I called ahead, a staff person I talked to wasn't sure if it was currently on display, so I was very happy when I came upon the spectacular piece of furniture. 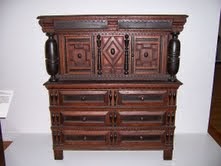 How gorgeous is this piece?! I always get such a thrill when I see things in person that belonged to my ancestors and this one did not disappoint!

It belonged to Mary (Burr?) Howes (ca 1603 to December 1695) and her second husband Thomas Prence (ca 1600 to March 1673). It stayed in the family until 1925 when a descendant sold the cupboard for $3,000 to Wallace Nutting. Massachusetts native Wallace Nutting was a famous photographer, artist, and antiquarian. Wealthy banker J. Pierpont Morgan Jr. purchased the piece for a then astounding amount of $20,000 and donated it to the Atheneum.


Mary had married, first, Thomas Howes (ca 1590 to October 1665). They are my eighth great-grandparents. I descend from their son Joseph Howes who married Elizabeth Mayo. I wrote about Mary and Thomas Howes here and here.

The description at the museum reads:


This cupboard, which belonged to Thomas Prence (c. 1600-1675), a governor of Plymouth Colony, is among the masterpieces of seventeenth-century furniture.  Nutting bought the cupboard from a descendant of Governor Prence in 1921 and felt it was the most important object in his collection. Court cupboards were the most expensive furniture form to produce in the seventeenth century and used in households to store imported textiles and valuables. This monumental case is decorated with mannerist style carving, molding, turning and paint and belongs to...related chests with serrated moldings made by Plymouth...

Unfortunately I can’t read a few words on the description because of glare. It irks me there is no mention of Mary!

There is an article about the Cupboard in the October 1922 issue of Antiques magazine, written by Wallace Nutting himself. It traces the path the cupboard took through family members. The article can be found through a googlebooks search.


From Thomas Prence's March 1673 will:
My will is that Mary, my beloved wife shall have such household goods of Any kind as were hers, before wee married, Returned to her againe.

Item I give unto my said loveing wife my best bed and the furniture there unto appertaining, and the Court Cubberd that stands in the new Parlour with the Cloth and Cushen that is on it.

I have read that Mary bought the cupboard with her when she married Thomas Prence in the 1660s, but the way the will is written seems to indicate it was not part of her dowry. Nutting wrote that the bed and cupboard were the most valuable and important pieces of Prence's personal property and giving them to Mary was a mark of respect and affection. Prence's generosity was unusual for that time period, which makes me think Mary was a very special person whom he appreciated at a time when women had so few rights.

Mary returned to Dennis, Mass., after the 1673 death of her husband, bringing the Court Cupboard with her. It stayed in the family until 1921 when Wallace Nutting purchased the piece for $3,000.

Mary died in December1695; she was about 92 years of age. The inventory of her estate mentions an old chest and cupboard at Prence Howes' (her grandson--a Howes and Prence descendant). The Howes Family Association purchased a chest/trunk that belonged to the Howes family which is on display at the Josiah Dennis Manse in Dennis. Another place for me to visit!

Update, May 15, 2017: I just realized that the Cape Cod Library of Local History and Genealogy Pamphlet Series, volume 1, has an article "The Prince-Howes Court Cupboard," published 1927. It gives a lot of detail about the history of the cupboard as it moved through the Howes family, as well as details of the piece itself. It locked to serve as a safe of sorts for family valuables. Court stood for curt, meaning short. It was a sideboard and owning one with elaborate design was a mark of social position.


Isaac Billington (sometimes Isacke in records) was born about 1644, probably in Plymouth, Mass., the son of Francis and Christian (Penn) Billington.  I wrote about Francis here. Isaac’s father and grandparents came over as “strangers” on the Mayflower and were not well-regarded by the “saints.” John Billington was hanged for murder and his young sons Francis and John were frequently causing a stir. Things changed, though, as John Billington’s children and grandchildren seemed to be well-respected citizens. Isaac is my 8th great-grandfather on my grandfather Arthur Washburn Davis’ side of the family.

Isaac was deeded 50 acres of land at Plymouth from his father Francis in 1665:
On 11 May 1665 "Francis Billington living in the jurisdiction of Plymouth in the place called Nama (----) otherwise called Namasquocomaquist" to "my sonne Isacke Billington," "for natural affection," "after my wifes decease and mine," "all the land that I have lying at the place called by the Indians Namasquocomaquist on the southward side bounded with the two red oakes betwixt my land and Joseph Bumpas; on the north side with a white oake tree marked betwixt my land and Samuell Eatons; buting upon the River called Namasskett River; and from the river up into the woods or plaines one mile; the quantitie of fifty or threescore acrees." (Francis Billington makes further provisions in case Isaac should marry.) Witnesses: Samuel Sturtivant, William Crow, William Hoskins (Plymouth Co. Deeds, The Mayflower Descendant vol. 35, no. 1 Jan. 1985) I believe this land is in what became Middleborough.

Before 1675, Isaac married Hannah Glass. Hannah was born at Plymouth on Christmas Eve, 24 December 1651, the daughter of James and Mary (Pontus) Glass. I wrote about James and Mary here.

Isaac and Hannah had six children, although none of their births were recorded they are all mentioned in deeds and probate records. They were probably born Marshfield and Middleborough:

I descend through Lydia.

Isaac lived at Middleborough, then at Marshfield from 1675-77 during King Philip's War, but returned to Middleborough at the urging of his parents. Although Marshfield was spared from attack during the war, other surrounding towns were not as fortunate.

Hannah received land from her mother Mary Pontus Glass Delano: Phillp Delano Senr aged 74 years or there about Testifieth & Sayth . Before he marryed mary Glass ye Relict of James Glass Deceased That she ye sd mary gave all her Lands unto her three children mary wybery & Hannah equally alike. Phillip delano Senr & mary his wife Came this: 3: 1: 76/77 & took oath to this above written Before me John Alden Assist. (From Plymouth Colony Deeds, VI: 93)

In 1696 Isaac sold land: Isaac Billington of...Middleboro...for and in consideration of...fifty shillings...paid by John Holmes of (Middleboro)...sell...The one half of a whole share of the undivided Lands purchased by captain Thomas Southworth of Josiah Wampatuck...26 June 1696.
Isaac Billington.
Samuel Wood his mark
Ephraim Tinkham his mark
Acknowledged 30 June 1696; recorded 14 Oct 1697

In a petition dated 1 March 1703/4 Isaac and Hannah Billington described their seven years of caring for the aged Francis and Christian, asking the court to award them all of Francis' landed estate in Middleborough. This request was evidently denied, for Isaac's daughter Desire soon began seeking quitclaims for the land from all her grandfather Billington's other heirs.

Near death, on 9 Dec 1709, Isaac deeded his homestead and 50 acres at Middleborough to his son Seth, mentioning other land given to son Isaac. The inventory of his estate was taken 16 April 1712 and administration given to son Seth 21 June 1712. The records of Seth's own estate provide proof of Isaac's children, all probably born Marshfield or Middleborough:  Desire, Lydia, Eleanor, Mary, Seth, Isaac.

Hannah died after 30 Aug 1704 and before 9 Dec 1709 when Isaac deeded his land to his sons without providing for his wife. On 30 Aug 1704 Isaac Billington and wife Hannah joined in a deed with Joseph Bumpas and wife Wybory all of Middleborough, and Samuel Hunt and wife Mary of Duxbury, all the women daughters of Mary Glass alias Dellano, deceased, daughter of William Pontus, deceased. All six grantors conveyed land at Plymouth inherited from William Pontus, Hannah’s grandfather.

Isaac died 11 December 1709 at age 66. His death is recorded in the Middleborough Vital Records.