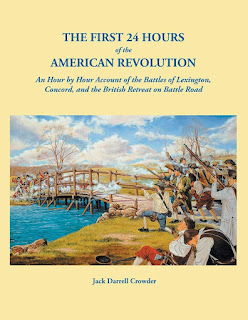 I really enjoyed reading this book about the first hours of the Revolution. Growing up in Lexington, I watched the annual Patriots Day Parade, occasionally getting up early enough to watch the re-enactment. Of course it was something we learned about in school with all that history at our doorstep, including 18th century homes and taverns to tour. I used to imagine what it would be like to have the men folk in your home rush off in the wee hours prepared for battle, watching from your house as the Red Coats marched by praying they would not stop and enter your home, and hearing or even watching the battle. As an adult, I didn’t think very much about the Revolutionary War until I discovered multiple ancestors who served in the war, which piqued my interest.

Crowder does a nice job in just 126 pages of summarizing what occurred in those vital first hours of the war. The illustrated 8 x 10 softcover book is divided into these chapters:

The British March and the Alarm is Given

Alarms Given to Other Towns in the Area

The Battle of Lexington

The Battle of Concord

Battle Road from Concord to Lexington

Battle Road from Lexington to Boston

Propaganda of Lexington and Concord

It’s riveting to read about the bravery of men from young teens to men in their prime to elderly, eager to fight for the freedom of the country. I love the story of one man of about 78 years of age named Samuel Whittemore who, despite his age and physical infirmities, leaves his farm to join the fray. He kills one and wounds two other soldiers before he is shot in the face, beaten and bayonetted multiple times. A doctor feels he will soon die and not worth tending to, but he is encouraged to dress Samuel’s wounds. Not only did Samuel survive that day, he went on to live another 18 years!

his book is available to purchase from Genealogical Publishing Company which provided me with a copy to review.

John Soule abt 1632 to by November 1707 and wife Rebecca Simmons of Plymouth and Duxbury, Massachusetts

John Soule was born Plymouth about 1632, son of Mayflower passenger George Soule and his wife Mary Becket. I wrote about George and Mary here.   John’s birth is not recorded but in a March 1705/6 deposition he stated he was aged “about seventy-four years.” John is my 9th great-grandfather on my grandfather Arthur Washburn Ellis Davis.

John married Rebecca Simmons about 1655, probably at Duxbury, Mass. Rebecca was born about 1635, the daughter of Moses and Sarah Simmons/Simonson/Symonson. Proof that Rebecca Simmons was the wife of John Soule is found in a deed of gift dated 30 December 1674 (Plymouth Colony Deeds Volume IV, page 43). Moses Simons of Duxburrow, in consideration of a marriage between John Soule of Duxburrow and eldest daughter Rebeckah,  all his purchased lands at Namaskett (Middleborough).

Rebecca and John had nine children:

I descend from Sarah who married Adam Wright whom I wrote about here.

Esther and John had three sons:

John was executor of his father George Soule’s estate and received land at Duxbury. On 2 October 1660 John Soule of Duxbury along with 23 other people were fined 10 shillings each for being at Quaker meetings.

John died intestate at Duxbury, but the date of his death is not known. His widow Hester was appointed administratrix, on 14 November, 1707. Inventory of the estate of the estate of John Soul of Duxbourrough was taken on 3 December 1707. The inventory included one cow and heifer, 2 swine, a cow hide and mare hide that were at the tanners in Plymouth, spectacles, brass and pewter, Taken by Thomas Delano, Abraham Samson, Benjamin Delano. The record of this appointment and inventory is in the Plymouth County Probate Records, Volume II, page 87. On 5 December 1707 there was a separate appraisement of Mr. John Soul’s parcels of land in Middleborough. Land included a lot of cedar swamp in the Six and Twenty Men’s Purchase, land in Assawanset Neck, upland from the last division in the Sixteen, shilling purchase and the share of Cedar swamp at Assonet, undivided land in the Sixteen Shilling purchase, two lots in the south purchase. Total value 17 pounds 5 shilling.

A 5 March 1707/8 document about the settlement of John Soule’s estate states that during his life he had settled portions of his land by deed to all of his sons and that his daughter Sarah had one cow, and daughters Rachel and Rebecka had nothing of their father. Adam Wright on behalf of his children with wife Sarah now deceased, John Cob and Rachel his wife, and Rebecka the wife of Edmond Weston mutually agreed, taking into account the value of the cow Rachel received and the value of the Middleboro land, that each of the women should receive 6 pounds 8 shilling 4 pence each. Sarah’s children, Rebecka Weston and Rachel Cobb were also to receive some of the land mentioned.

Mayflower Families in Progress, "George Soule of the Mayflower and His Descendants for Four Generations," revised by Robert. S. Wakefield, third edition, published by the GSMD, Plymouth, Mass., 1999