Note: I edited this entry in Jan. 2018 (corrected Edmund's birth year and age at immigration)

Edmund Freeman was born in 1596, Pulborough, Sussex, England, the son of Edmund and Alice (Coles) Freeman.  He was baptized there 25 July 1596 at St. Mary's Church.  He is my 11th great-grandfather on my grandmother Milly (Booth) Rollins’ side of the family.

Edmund came to America aboard the Abigail in 1635, which was at sea for 10 weeks and experienced a smallpox outbreak. He settled first Saugus (now Lynn), later moving to Sandwich as the leader of the “Ten Men From Saugus,” who founded Sandwich according to a 3 April 1637 grant by the King. He was also in Duxbury and Plymouth at one time (made a freeman at Plymouth on 2 Jan 1637).
Edmund witnessed the will of wealthy man named Dennis Geere who developed smallpox on the Abigail and who left bequests to several men, including Thomas Tupper and Benjamin Nye, who were probably fellow passengers. They all became part of the group that moved with Freeman, or soon after, to Sandwich.

He married, first, Bennett Hodsoll in Cowfold, Sussex, 16 June 1617.  She was baptized Pulborough on 25 July 1596, the daughter of daughter of John and Anne (Maundy) Hodsoll. She died at Pulborough in April 1630.  His second wife was Elizabeth (possibly Raymer but haven’t found proof of her maiden name), whom he married 10 August 1632 in Shapley, Sussex.

Edmund had at least six children.

Mary and Margaret are often given as children of Edmund and they were certainly members of his household in Sandwich. They were likely children of his second wife by her first husband. Mary married in 1653 Edward Perry and Margaret married Edmund Freeman, 3rd, as his second wife after the death of Rebecca Prence who died soon after their marriage.

Edmund's 1st and 6th children were baptized at Pulborough and the middle four at Billingshurst.  Even though the towns are about 6 miles apart, the parishes are contiguous. Edmond apparently owned land in both parishes.

I descend from John as well as Elizabeth.

Seems to have had some education, as he wrote a letter preserved in facsimile (in Bradford's history of Plymouth Plantation) shows care and perhaps business training. It is probable that by his marriage he rose in social scale and bettered his prospects. About two years after his marriage, he appears to have removed from Pulborough to Billingshurst, a parish about six miles northeast, as his younger children were baptized there.
When Edmund came to Massachusetts with his wife Elizabeth in 1635, he was called Edward age 39, husbandman. Elizabeth was 35. The children that came with them were: Alice age 17, Edmund age 15, Elizabeth age 12, and John age 8. It doesn’t appear he came for religious reasons, but rather for opportunity. He was involved in a lawsuit against his late wife Bennet’s family on behalf of his children and others.

Edmund presented to the colony 20 “corsletts” which were pieces of plate armor. He was frequently referred to as “Mr.,” which was little used then, generally for men of substance. He was a person of prestige as a brother-in-law of John Beauchamp of London, an investor in Colonial ventures with a stake in Plymouth Colony.

Edmund was active in civic affairs and clearly an important and well regarded member of the community. He was assistant Governor to Gov. William Bradford for seven consecutive terms beginning in 1640. He was on the Council of War in 1642; Deputy to the General Court in 1646.

Edmund Freeman Sen with sons Edmund and John were on the 1643 Sandwich able to bear arms list.

In 1645 Captain William Vassal of Scituate petitioned the Plymouth Court to legalize the toleration of all religious beliefs. The court of seven plus the governor was evidently divided; Edmund was probably in favor of toleration. The older Pilgrims had become more conservative. First the matter was delayed, then never raised again. This was a turning point for the Colony, which then started requiring Church attendance and penalizing criticism of the ministers or government.

His two sons that survived to manhood both married daughters of Gov. Thomas Prence.

Edmund Freeman was sworn in as Assistant Governor 2 June 1640 and continued to be elected annually through the year beginning June 1645. Some of his assignments included: hearing causes in the Cape towns, hearing a case at Yarmouth on land boundaries, see a maid whipped for stealing at Barnstable, see Anne Lynceford whipped for adultery at Yarmouth as well as her consort Thomas Bray, other offenders to be whipped at Barnstable. In March 1641/42 he himself was presented for lending a gun to an Indian. Something about him that I find admirable.

During Quaker troubles he always spoke of moderation, something that may have cost him re-election as Assistant Governor in 1646. Edward Winslow wrote that Edmund was “left out” because of his professed Anabaptistry and separation from the Church. Edmund’s tolerance during a very intolerant time makes him one of my favorite ancestors. He clearly had liberal leanings and men like him made Plymouth Colony a more tolerant place than Massachusetts Bay was at the time.

His first residence in Sandwich was in the eastern part of town, sold by deed "first mo, 5th 1671" to William Allen. Part of old house was still standing in 1875. Quakers say it was first place in Sandwich where Friends meetings were held.

He was often involved in financial matters with the Plymouth Colony investors, including his brother-in-law Beauchamp. He went back to England at least once, possibly necessitated by family interests in Sussex. Only known result is that he brought back a consignment of hats to sell valued at 52 pounds.

Again his Quaker sympathies were evident when in 1659 he was fined 10 shillings for refusal to aid the Town Marshal in his proceedings against his Quaker neighbors. His stepdaughter’s husband Edward Perry was also present, and was fined 20 shillings for abusive speech to the Marshal. In 1645 he received John Beauchamp's power of attorney to collect 400 pounds due to Beauchamp. He raised the sum through receiving pledges based on real estate and houses owned by the eight original Undertakers. This couldn’t have made him popular with his fellow New Englanders and may have also contributed to his not being re-elected to the Court in 1646. After this he seemed to have withdrawn almost totally from public life, until the end of his life 36 years later. Some historians say he had the gifts of a peacemaker.

A number of men were fined for refusing to assist George Barlow, special marshal for Sandwich, to enforce laws against Quakers. Sandwich's eminent citizen Mr. Edmond Freeman was fined 10 shillings on 6 Oct 1659.

The founders of Sandwich received criticism for allotting themselves a large portion of meadows at Sandwich, resulting in a warning from Plymouth Colony’s court.

In 1646 he was elected deputy from Sandwich. He was significantly fined for non-appearance at the main election and law making session. After this he seemed to have withdrawn almost totally from public life for the last 36 years of his life. Edmund Freeman Sr. was elected Constable in 1650, a minor office for one of his background, but this may be a transcription mistake of Sr. for Jr.

In 1651 Freeman received land in division. There are no records of the original grants to the 60 families. Edmund's lands were very extensive and included the whole of Plymouth Neck, also called Freeman's Knob, now Sagamore Hill. He lived near Scusset Marsh. Much of his land passed to his sons John and Edmund who lived in the Ploughed Neck area. When John moved to Eastham, Edmund made sure the land stayed in the family until the time of the American Revolution when it was broken up and sold off.

When his daughter (or step daughter) Mary married Edward Perry, they refused to be married by the person authorized to conduct marriages in Sandwich or by the magistrate. The Court must have been angry that Edmund allowed this to happen in his family.

At the 11 May 1664 town meeting, Edmund named to a committee of three men to make a new agreement with Thomas Dexter about grinding the town's corn.

Appointed selectman in 1668 and served 11 years.

In 1672 Mr. Edm Freeman Sr and four others were requested to settle and confirm the township with the sachem of Manomet (now Monument).

On the 1675 list of Sandwich men allowed to vote at Town Meeting.

In 1676, Edmund was charged with recruiting freely Indians as allies in the war against King Philip.

A letter written by Edmond Freeman:
Sr thse may please your worship to understand that I have appointed my son William Paddy to receve of you for the Corne which I was to have of the last yeare. I desire you would satisfy to him for so much as I paid for yt long sins, which is I think 11 li 13s 4d. ther was A cow appointed by Mr. Andrews for Mr Williams of providens. I desire you woulde be pleased to send me word whether you have any or noe or mony to buy for him; I have directiones from him to that effect that Mr Williams may have a Cow to keepe her for haufe the calfes I the rather make bold to entreat your answer because Mr. Williams hath sent ot me often tymes abought yt. With my salutations ot you in the lord & to all those that seeke the Lord with you, I take Leave your worshipes to use Edmond Ffreeman & pr.
Last moneth 25 days 1645 (Feb 25, 1645/46?)

Edmund Freeman died in Sandwich in 1682. He was age 92 at the time of his death, the last of the Ten Men From Saugus. He is buried on what was his land in Sandwich, next to his wife Elizabeth. It is the oldest known burying place in Sandwich and their graves marked by large rocks, referred to as the Saddle and Pillion. The site is 1.25 miles west of Town Hall. 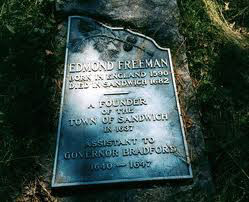 Frederick Freeman, Freeman Genealogy in three parts, viz: I. Memorial of Edmund Freeman of Sandwich and his desc., II Memorial of Samuel Freeman of Watertown and his Desc., III Notes, Historical and Genealogical of Families of the Name of Freeman, distinct from Parts I and II, or whose connection is not clearly ascertained,1875.

Henry Kittredge, Cape Cod Its People and Their History, 1930