Book Review: Nathaniel Morton’s The New-England’s Memorial, or A Brief Relation of the Most Memorable and Remarkable Passages of the Providence of God, Manifested to the Planters of New-England , in America with Special Reference to the First Colony Thereof, Called New Plymouth, 1669, reprint/Applewood’s American Philosophy and Religion Series.

I’ve been meaning to read this book for some time as it is written by my 10th great-grandfather, and I finally purchased a copy on Amazon. It is a more interesting read than I would have expected of a 17th century book!  It is about 200 pages long and is arranged chronologically, covering the first 47 years of Plymouth Colony. 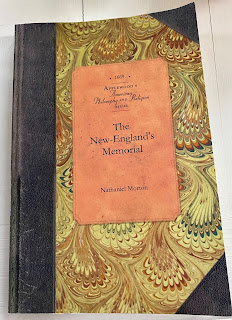 Morton writes about select parts of the Colony’s history, with a strong focus on religious leaders from throughout New England. He includes who was Governor and assistants for each year, as well as major events such as the first encounter, later peace agreement and eventual wars with Native Americans. He mentions storms, people being struck by lightning, and deadly outbreaks of illness. These were all perceived as acts of God. “New diseases the fruits of new sins,” Morton writes a 1650 outbreak of an illness primarily affected Boston children. When an image of a spear appeared in the heavens, Morton writes “God awaken us that we be not heedless spectators of his wonderful works.”

I really appreciated his detailed account of an August 1635 storm that knocked down houses, sank ships, causes flooding and knocked down the important corn crop. Imagine experiencing something like that without any warning? And then thinking if the roof was blown off your home you were being punished by God! I was surprised by his understanding of scientific topics such as comets and eclipses. Morton was obviously an educated, well-read man with a strong vocabulary.

Morton was a deeply religious man who was intolerant of anyone who had beliefs that differed from his own, which comes through in his moralizing style. He calls people wicked, that Anne Hutchinson preached “abominable tenets,” and Quaker Mary Dyer was a “hideous monster” and a heretic.

He writes about some high profile people in Plymouth Colony, often in the years of their deaths. When these people died he uses euphemisms such as “slept in the Lord,” “changed this life for a better,” or were “removed by God.”

Reading about who was chosen Governor and Assistants each year really drove home to me how little change there was, with the same small group of men (members of the church of course) calling all the shots. It must have been hard for most “strangers” (the non-Separatists) not to feel represented by their government.  The rebellious Stephen Hopkins was for a time an exception to this, but he eventually stepped away (or was forced out) of public service. It is not surprising that colonists left to live more freely on Cape Cod and in new towns near Plymouth to get out from under the government’s thumb.

One criticism…I wish the book had a name index!

About Nathaniel Morton: He was born Leiden, Holland, about 1613, the son of George and Juliana (Carpenter) Morton. They came to Plymouth in 1623. When his father died, Nathaniel was raised by his uncle, Gov. William Bradford. He married Lydia Cooper in 1635 and they had 9 children. After Juliana’s death, he married Hannah Pritchard Templar. He worked as secretary/clerk of the Plymouth General Court. Morton died 1685 in his beloved Plymouth where he was a large landholder. He also wrote a history of the Church of Christ at Plymouth.

William Gray 1650-1723 and His Wife Rebecca Dillingham of Yarmouth and Harwich, Massachusetts

William and Rebecca raised their family in Harwich. They had six daughters and one son, order uncertain, likely born Harwich:

I descend from Rebecca who married Samuel Berry. I wrote about that couple here.

William Gray had the unenviable job in 1706/7 of being the receiver of crows heads, as each homeowner was obliged to kill 6 blackbirds or 4 crows because they were damaging crops. The heads were handed in as proof they were meeting their individual quota.

William served in King Philip’s War under Captain Gorham. In 1675 he received 7 pounds, 13 shillings for her service. In the second expedition against the Narragansett, Sergeant William Gray was paid 6 pounds 12 shillings for his service. In 1676 at the end of the war, his taxable property was 13 shillings, 9 pence.

I have not found death records for William and Rebecca. William died at Harwich between 22 May 1723, when he wrote his will, and 18 July 1723, when the will was proved. He names his children in his will (Barnstable County Probate Records 4:128): William, Hannah, Dorothy, Sarah, Mehitable, and Rebecca. His daughter Thankful had already passed. I haven’t read the will myself, so I don’t know if his wife Rebecca is named in the will. If anyone has a transcription of William’s will, please let me know!

CW Swift publisher, The Yarmouth Family of Gray, Cape Cod Library of History and Genealogy, No 58

George Madison Bodge, Soldiers in King Philip's War, A Critical Accounting of That War with a Concise History of the Indian Wars of New England from 1620-1677, 1896