My Ancestors From the Town of Plymouth, Mass., Part 1--Mayflower Passengers

This post is part of a new project…organizing my direct ancestors by the towns in New England where they lived. I love learning about the towns in which they lived and will list my favorite resources. Please add a comment on your family from these towns and your favorite resources as well. Much of the genealogical information is a work in progress! I have blogged about many of the ancestors listed, which you can find by using the search function.

My family lived in Plymouth from 1620 down to my grandfather, so this will be the first of several parts. Listed below are the adult male passengers that are my direct ancestors. 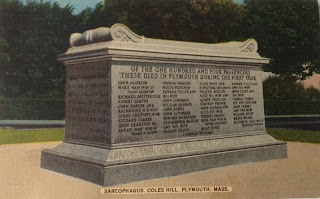 Isaac Allerton b 1586, Suffolk, England. Married 1st Mary Norris, 2nd Fear Brewster, 3rd Joanna Swinnerton.  I descend through Isaac and Mary’s daughter Mary who was born Leiden, Holland in 1616. She married Thomas Cushman about 1636 at Plymouth and died Plymouth in 1699. Isaac moved to New Haven, CT where he died in 1659.

William Brewster b. ca 1567 and his wife Mary. I descend through their son Love b. ca 1610 who was also a Mayflower passenger as well as daughter Patience b. ca 1600 who arrived later on the Anne.  The family moved to Duxbury but William kept his house in Plymouth.  Patience married Thomas Prence and she died at Plymouth as a young woman. Love’s family lived in Duxbury for generations and Patience’s family lived at Eastham on the Cape.

Peter Chilton who died on board the Mayflower so never actually became a resident of Plymouth and his wife Mary ___ died at Plymouth early in the first winter. Their daughter Mary who survived and married John Winslow, Gov Edward Winslow’s brother. They moved to Boston where they lived the rest of their lives and became quite wealthy.

Francis Cooke, born after August 1582, immigrated to Plymouth on the Mayflower, married Hester Mahieu in Leiden, Holland, died Plymouth 7 April 1663 (she was b. 1582-88 prob Canterbury, dau of Jacque Maheiu). I descend from their daughter Hester who was born 1621-25, married Richard Wright of Plymouth, died Plymouth between 1669 and 1691.

Francis Eaton, b. 1596 Bristol, Gloucestershire, Mayflower passenger, m. Sarah ____, 2nd Dorothy _____, 3rd Christian Penn.  He lived briefly at Duxbury but returned to Plymouth where he died 1633. I descend through Samuel Eaton whose mother was Sarah; he was born about 1620 and died before 29 Oct 1684 at Middleborough.

Samuel Fuller, born Redenhall with Harleston, Norfolk, England about 1580, lived at Leiden, Holland, Mayflower passenger, married 1st Alice Glasscock, 2nd Agnes Carpenter, 3rd Bridget Lee. He died 1633 at Plymouth. I descend through his son, with Bridget, Samuel. Samuel was born Plymouth about 1629 and moved to Middleborough where he died in 1695. He married but his wife’s name is unknown.

John Howland, b. about 1592 Fenstanton, Huntingdon, Cambridgeshire, m. Elizabeth Tilley 1623 at Plymouth, died Kingston 1672. He also owned land at Colchester, Duxbury, Middleborough, Marshfield. He lived in Augusta Maine on the Kennebec operating the Pilgrims’ trading post. I descend through their daughter Ruth b. Kingston about 1646, who married Thomas Cushman in 1664 at Plymouth.

Useful resources about Mayflower families are too plentiful to list but here are some:

Jeremy Dupertuis Bangs, Strangers and Pilgrims, Travellers and Sojourners, Leiden and the Foundations of Plymouth Plantation, 2009

Sherwood, Mary B., Pilgrim A Biography of William Brewster, 1982