Is there a more common surname than Smith? Much of my information on my Smith ancestors is a bit iffy, because even in 17th century Plymouth Colony it was hard to discern one Smith from another!

My 8th great-grandfather, Ralph Smith/Smyth, was likely born in Hingham, Norfolkshire, England circa 1610.  He may have come on the ship Lincoln or the ship Elizabeth Bonaventure in 1633. He is listed in the 1848 NEHGR article as one of the First Settlers of Hingham, Massachusetts, settling there in 1637. During that year, he drew a house lot there on Bachelor Streeet, now Main Street. Many of the early Hingham settlers were from Old Hingham.
Ralph Smith removed to Eastham. He is listed in the 1852 NEHGR article on the First Settlers of Eastham, on what is now Cape Cod, May 22 1655. In 1657 he took the Oath of Fidelity at Eastham.

Ralph’s first wife is often seen as Martha or Rebecca Hobart, although I have not found any proof of her identity.

I descend through Ralph's son Daniel and then through Daniel's daughter Content Smith who married Thomas Howes.

Ralph was constable at Eastham in 1660. On 7 May 1661, he was fined 20 shillings for "lying in and about the neglect of his duty, about a warrant directed to him, and concerning the seeing or not seeing a whale, and other misorderly carriages tending to disturbance in the town."

Ralph died at Eastham before 27 October 1685, when administration of his estate was granted to his widow Grace and his son Samuel, both of Eastham. His Inventory included "1 Bible & Psalm Book."

He is buried at Cove Burying Ground, where his descendents erected a monument in his honor in 1946. 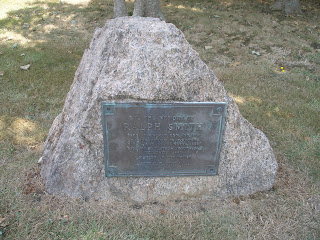 TO THE MEMORY OF
RALPH SMITH
BORN AT HINGHAM ENGLAND 1610
LEADING FIGURE IN FOUNDING
HINGHAM MASSACHUSETTS, 1633
REMOVED TO EASTHAM ABOUT 1654
DIED THERE 1685
A PIONEER OF DISTINCTION
ERECTED BY THE ASSOCIATION
OF DESCENDANTS OF RALPH SMITH
JUNE 1946

If anyone has resources on Ralph Smith I have not included, I'd love to hear from you!