I was on the Cape with family this week and stole away to visit a few cemeteries while everyone was at the beach. Family members think I'm quite odd, but I know fellow family history lovers understand. : )  I visited Cove Burial Ground in Eastham for the first time and was pleased to see how the surviving headstones are so well looked after. So many older cemeteries have stones that are unreadable because they are covered with lichen, moss and mold, but there are wonderful people in Eastham who have a strong respect for the past.

Jonathan is my 11th great-grandfather, through my grandmother Mildred Booth Rollins. Since he was a prominent citizen of Plymouth Colony, there is an abundance of information available about him. He was an attorney (he was often called Esquire in records), a justice of the peace who performed many marriages, a Captain in the military company serving in King Philip's War, and a church Deacon. He was a Representative to the Court for 12 years and served as a Selectman for 10 years.  He was made a freeman at Eastham in 1655 and the town’s first schoolmaster in 1666.
He married, first, at Eastham on 26 Oct 1654, Rebecca Bangs. Rebecca was born about 1633, the daughter of Edward and Rebbeca (maiden name unknown) Bangs.

Jonathan and Rebecca had six children:

I descend from Rebecca and Thomas Freeman.

Rebecca died before 19 October 1677 at Eastham. She’s possibly buried at the Cove Burying Ground  in Eastham. 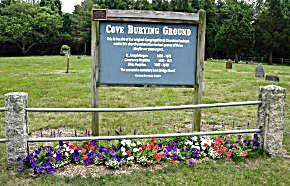 Jonathan married, second, between 1667 – 1671, Hannah Prence, the daughter of Governor Thomas Prence and his wife Patience Brewster. Hannah had married first Nathaniel Mayo, with whom she had six children, so she was a mother/step-mother to as many as 14 children.

Jonathan and Hannah had two children:

Hannah died before before November 1698 at Eastham and is buried at the Cove Burying Ground there, without a surviving headstone.
Jonathan married, third, on 23 November 1698 in Barnstable, Sarah Lewis. Sarah was born Barnstable on 02 February 1642/43, the daughter of George and Mary (Doggett) Lewis. She married first James Cobb with whom she had 11 children.

Although not all of the births of Jonathan’s children were recorded, there is a deed naming them, their mothers and spouses. It is dated 1712 Barnstable County Deeds Book 9, Folio 362 and 363.

Jonathan Sparrow died in Eastham on 21 March 1706/07 at age 73. He is buried at Cove Burying Ground in Eastham. His stone is one of only four surviving pre-1710 stones there. It is engraved with a winged skull, an hourglass, fruit and gourds and is inscribed:  “Here Lyes Buried ye Body of Capt. Jonathan Sprrow aged 73 years died March ye 21st 1706/7.”

He gave his wearing clothes to his three sons, John, Jonathan and Richard.

Grandson Jonathan Sparrow: gun and catouch box, horn and pouch that he left at his brother Joshua Bangses.

Son John: winscot chest, land abutting John Coles land in Pochet, marsh at Billingsgate after he pays 10 pounds to three dau, Rebecka, Lydia and Patience. One third meadow at Little Namskeakett, meadow from last division, also his share after wife ceases to be his widow.

Son Jonathan: other part of land on Pochet Neck near John Coles.

Son Richard: lot of meadow at Great meadow, land and meadow where Jonathan lives and all housing and fencing after wife no longer widow. Allowing her to have the new room from the ground to the roof and half the lands during her widowhood and profits of all his meadow at Namskeket and Pochet flats. One third meadow at Namskeket and share at low flatts which he bought from Titus Wixom, 1/3 share low flats near Thomas Mayo and Joseph Rogers after wife's widowhood.

To Son Jonat (Jonathan): one share and a third share of marsh which he bought from Barnabas Wixum near the beach Creek after wife's widowhood.

To loving wife half of house, the new end, half land and meadow near home, half barn and profits of meadow, privilege of cutting wood, fencing stuff, one horse and the furniture belonging to the horse, one feather bed and bed curits and coverings, one fourth moveable estate, all corn and malt that is in the house.

Rest of estate equally divided among three sons and three daughters and the children of Capt Samuel Freeman had by daughter Elizabeth, Benoney Gray to have an equal part of moveables with his uncles and Aunts. Also William Freeman and Lydia Godfree shall have one half of their mothers' part. Sarah Williamson’s that living along with his wife one sheep and lamp to be dlivered to her father.

Sarah died in Eastham on 11 February 1734/35 and is buried at the Cobb’s Hill Cemetery in Barnstable. Her gravestone survives and reads: ”Here lies ye body of Mrs. Sarah Sparrow wife of Jonathan Sparrow Esqr of Eastham who decd Feb ye 11th 1735 in ye 92nd year of her age."

Rev. Enoch Pratt, A Comprehensive History, Ecclesiastical and Civil, of Eastham, Wellfleet and Orleans, County of Barnstable, Mass. from 1644 to 1844, 1844