Thomas Howes married Mary (?Burr) and they had three sons: Joseph, Thomas and Jeremiah. Family legend says that his son Jeremiah was born at sea during the passage from England.
An early Howes genealogy by JC Howes gives a long history of the family in Morningthorpe, Norfolk, England, but this has since been proven inaccurate.
Thomas, along with Anthony Thacher and John Crow, founded the town of Yarmouth. They were authorized to settle there permanently in early 1639. The area where Thomas settled later became the town of Dennis.
In 1648 Pilgrim Myles Standish was sent to settle a land dispute in Yarmouth. Other settlers felt the land division was unfair and that Howes, Thacher and Crow gave themselves too much land. Thomas had taken up 100 acres of upland and 20 acres of meadow. Around the same time, Indian Sachem Janno complained he was not paid for the land purchased by Thacher and Howes. The Sachem was compensated and Thomas later purchased more land from him.
Before settling in Yarmouth, Thomas was at Salem in 1635. In Yarmouth he served on the committee to divide planting lands in the first division, served as constable in 1644, on the council of war in 1658, was a frequent deputy to colony court, and was appointed to "reserve the oil of the country" for Yarmouth (the government claimed a portion of whale products that came ashore within the colony). He was once fined for not attending court, but the fine was remitted when he had valid excuse.
Simeon Deyo wrote he was a man of influence, great maturity of judgment and of considerable importance in the colony. He was of the substantial middling class, either a staunch yeoman or educated gentleman. He also wrote that he left his sons with large farms and holding positions of honor and trust in the infant colony. (19th century local history books make me smile with their descriptions of the early settlers--if there were any tall buildings then, they would have been able to leap them in a single bound!)
Thomas was also planning to earn a livelihood by raising food supplies for the immigrants arriving in such large numbers to the Mass. Bay Colony, but he likely found the Cape Cod soil not perfect for farming.
Thomas and Mary lived in the vicinity of New Boston Road and Beach Street in what is now Dennis. All of their sons grew to maturity and their descendants, which have been numerous, now extend into the 13th generation. At times the Howes family has accounted for the largest percentage of the population of Dennis of any family. In the special census taken in 1837, 84 of the 664 households in Dennis were of the surname Howes.
The Howes family had a large number of mariners during the Golden Age of Sail. A number of the gravestones at the Howes Burying Ground mark the empty graves of men lost at sea. In the Great Gale of October 1841, twelve of the twenty men lost from Dennis were named Howes. (Dennis Historical Society Newsletter, July 1980)
The Dennis Historical Society has the large oak chest owned by Thomas and Mary on display at the Josiah Dennis Manse. The beautiful cupboard Mary brought to her second married to Gov. Thomas Prence (as his fourth wife) was purchased by Wallace Nutting and is on display at Wadsworth Atheneum in Hartford, Connecticut.You can read an article about the cupboard in Antiques magazine here.
Mary was an interesting woman as she had a talent for healing people. I will write more about her at another time.
Thomas died between 6 and 18 October 1665, in his home of 25 years along New Boston Brook. He was about 75 years of age. He is believed to be buried at the Howes Burying Ground in Dennis, as this land was once part of his estate. There is a monument there in his memory, erected by his descendants. 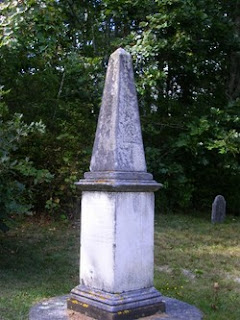 The will of Thomas Howes of Yarmouth (transcribed in the Mayflower Descendant, Volume VI, 1904) was dated 26 September 1665.  It mentions his three sons Joseph, Thomas and Jeremy/Jeremiah to keep the upland and meadow which he has already given them, his wife Mary to receive his dwelling house, outhousing, land, and movable goods to keep during her life as long as she remains his widow. After Mary’s death he wanted the New Field, half of Simpkins Neck and additional meadows to go to oldest son Joseph. After Mary’s death, he wanted his second son Thomas to have the dwelling house, outhouses, orchard and additional land and meadow including the other part of Simpkins Neck. He asked his son Thomas to teach or see to teaching the trade of cooper to grandchild Samuel and to give him a mare when he reaches the age of 12 and to keep the dwelling house in good repair for Mary. He gave additional land to his youngest son Jeremiah. He named Mary executrix.
Thomas’ inventory was taken 18 Oct 1665. The full inventory, which is quite lengthy, can be seen in the Mayflower Descendant noted above. It included a large amount of household furniture and goods, including silver, as well as guns, ammunition, a sword, coopers tools, two Bibles and other books, items in the dairy, spinning wheels, a cart, a plow, three horses and a colt, many cows, bulls, oxen, pigs, poultry.
Mary outlived Thomas by 30 years and may have been his second wife, but nothing has been found on a first wife.
There is a Howes Family Association (Box 904, Dennis, MA 02638) for descendants of Thomas Howes. I descend from Thomas and Mary’s sons Joseph and Thomas. They kept things cozy on the Cape!
Sources:
Robert Howes , Genealogy of the Howes Family in America, Howes Family Association and Dennis Historical Society, 2006
Charles Swift, History of Old Yarmouth: comprising the present towns of Yarmouth and Dennis : from the settlement to the division in 1794, with the history of both towns to these times, Yarmouthport, 1884
Simeon L. Deyo, editor, History of Barnstable County, Massachusetts, HW Blake & Co., New York, 1890
Nancy Thacher Reid, Dennis, Cape Cod: From Firstcomers to Newcomers, 1639-1993, Dennis Historical Society, 1996.
James W. Hawes, Thomas 1 Howes of Yarmouth, Mass., and Some of His Descendants, Together with the Rev. John Mayo, Allied to Him by Marriage, Library of Cape Cod History and Genealogy, No. 31, CW Swift Publisher, Yarmouthport, MA, 1917
Posted by Chris at 3:38 PM