Christian Remick was born about 1631 likely in Holland or England. His birth year is based on later records: In 1698/9 he is said to be about 67; in 1710 about age 80. His is my 9th great-grandfather on my grandmother Milly (Booth) Rollins’ side of the family.

He came to America as a young man; he was living in Kittery, York County (now Maine but then part of Massachusetts) in 1651 where he lived until his death in 1710. The part of Kittery he lived in later became the town of Eliot. He was a Kittery freeman in 1652.

Christian was one of the proprietors of Kittery and was prominent in town, serving as surveyor, selectman, and treasurer. He also was a representative to the legislature. He was granted a great deal of land over time in what are now the towns of Kittery, Eliot and South Berwick, amounting to about 500 acres. His first land grant in 1651 was where he made his home. It was on Eliot Neck, near the Piscatiqua River, not far from the Remick family burial ground.

In about 1654 Christian married a woman named Hannah, whose last name is sadly unknown. I have seen it as Foster without a source; Torrey gives it as possibly Thompson. They had 9 children, all born in Kittery:

Hannah and Christian’s great-grandson Christian Remick was an artist who was a sea captain, privateer, and a Naval officer in the Revolution. NEHGS in Boston owns one of his paintings of the British blockade in Boston Harbor. He also worked with Paul Revere, adding the color to the famous image of the Boston Massacre that Revere engraved.

Christian died circa 1710 in his 80th year. He and Hannah are likely buried in the family burial ground on Pleasant Street in Eliot, Maine. A descendant erected a monument for Christian and his son Joshua. 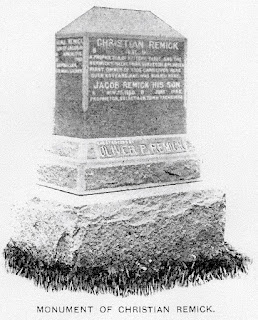 A PROPRIETOR OF KITTERY ELIOT AND THE

OVER 60 YEARS AND WAS BURIED HERE