I’ve barely scratched the surface in learning about Robert Cushman, due in part to there not being enough free hours in the day to do research, but thought I would share what I have learned so far. We are snowed in today, so what better time for genealogy?!

Robert Cushman (his last name is spelled in quite a variety of ways including Coachman and Couchman) is my 12th great-grandfather on my grandfather Arthur Washburn Davis’ side of the family. He did not come to Plymouth on the Mayflower but was one of the group’s leaders at Leiden, Holland. Robert was chosen Governor of the Speedwell, the ship that was making the journey to Virginia with the Mayflower, but it was not sea worthy and had to turn back. When it could not be satisfactorily repaired, some of the passengers were crowded onto the Mayflower, but Robert stayed behind. It is believed that his declining health was the main reason. In a letter to Edward Southworth in August 1620 he wrote that he thought he was close to death.


Robert came to Plymouth with his 14 year old son Thomas on board the Fortune in 1621 and was a Deacon of the church. In 1623 Robert Cochman is included in the division of land at Plymouth, receiving one acre as a passenger on the Mayflower. He was not a passenger on the ship but since he stayed behind because of the issues with the Speedwell, the leaders must have felt him deserving of the land. It seems his primary reason for the brief trip to Plymouth was to obtain signatures on articles of agreement that the Pilgrims had refused to sign the year before, which showed his excellent leadership skills. He also was to accompany goods on the return trip to give to the Merchant Adventurers as part of the agreement to finance the settlement. Perhaps he also went to make sure Thomas was amongst the Pilgrims given his father’s poor health. He also gave a sermon on the first anniversary of the Pilgrim’s landing. There is more about that below.


He was baptized at Rolvenden, Kent, England on 9 February 1577/78, the son of Thomas and Elinor (Hubbard) Couchman.

Sarah was buried St. Peter's, Leiden, on 11 October 1616. Perhaps she died in childbirth as she had a child buried 13 days later.

I descend from Robert’s son Thomas, whom I wrote about here. My direct line from Robert and Sarah is:

Robert married, second, at Leiden 5 June 1617, Mary (Clarke) Shingelton from Sandwich England, widow of Thomas Shingelton. She apparently died before 1621 as there is no evidence she came to Plymouth or any mention of children.

Robert was a grocer in Canterbury and a woolcomber at Leiden. He was clearly a well-educated man, as seen by his literate and businesslike letters to John Carver, Edward Southworth, William Bradford and the Leiden congregation, as well as in his role with the Separatists.

Canterbury Cathedral Archives contain records of libels involving Robert Cushman from 1603. Libels were derogatory verses posted on church doors throughout Canterbury, County Kent. A push to identify and arrest the persons responsible resulted in Robert Cushman, who had been apprenticed as a grocer to George Masters since 1596, to be deposed regarding his involvement in the libels. It seems that Robert Cushman wrote several libels and delivered them to Peter Masters, son of George the grocer. Peter then took them to Helkiah Reader, son of Thomas Reader, to post on church doors. Others accused of being involved in the scandal included Thomas Hunt, Nicholas Gibson and Joseph Tilden. Hunt, Reader and Cushman were imprisoned in the Westgate Prison in Canterbury. Tilden was Robert's step-brother, through his father's marriage to Ellen (Cowchman) Evernden. A couple of years after the depositions, on 31 July 1606, Robert Cushman married Sara Reader/Reder, sister of Helkiah Reader, and daughter of Thomas Reader.

Robert was excommunicated for not recognizing the Church of England and spent time in a cell of Canterbury’s West Gate Towers. He later fled to Holland.

Beginning in 1617 and continuing until his death, Robert spent much time in London and vicinity negotiating on behalf of the Leiden congregation and later on behalf of the settlers in Plymouth. He, John Carver and William Brewster labored constantly in their dealings with a number of London merchants, arranging for the shipping and provisions for the Mayflower and the Speedwell in 1620.
About 1619 Robert Cushman, then the Pilgrims' agent in London for the Mayflower voyage, wrote a 63 page book called The Cry of a Stone. It was not printed until 1642, about 17 years after his death, but it was probably read by others in manuscript form during his life. It provides a unique first-hand account of the Leiden years. He viewed his membership in the Pilgrim Church as "the neerest fellowship that the Saints can have in this world, and most resembleth heaven." Cushman probably first joined the Pilgrim Church in Leiden about 1609. His name on the title page is spelled Coachman.

Robert did not stay long in Plymouth. He returned to England on the Fortune on December 13, 1621. On the voyage home, the vessel was captured by the French and plundered. Robert was take to France and after two weeks he was released and returned to England where he acted as a financial agent for the Pilgrims.Fortunately, the signed articles of agreement and the manuscript of Mourt's Relation, which was written to assure the Merchant Adventurers of the success of the colony and attract new settlers, were not lost.
In London around 1621, he published a pamphlet on Emigration to America, in which he highlighted the advantages of the new country. In 1622 he printed the first sermon he preached in Plymouth in December 1621 on "Sin and Danger of Self-Love." This sermon was reprinted in Boston in 1724, in 1780 and in 1785. Interestingly the principal intent of the sermon was to convince the Pilgrims to accept the terms offered by the London merchants, and was therefore more of an economic than a theological nature. Also in 1622 he published an eloquent vindication of the colonial enterprise and an appeal for missions to the North American Indians.


In 1623 in connection with Edward Winslow, he obtained a grant for the territory of Cape Ann in Massachusetts from Lord Sheffield and there a group made the first permanent settlement in Massachusetts Bay Colony.


Documents in the High Court of Admiralty Case of Stevens and Fell vs. the Little James, 1624 includes testimony from Robert Cushman of Rosemary Lane, London, yeoman, aged 45 or thereabouts.

Robert Cushman died in London in  the spring of 1625 after contracting the plague. In early 1626 Myles Standish returned from a trip to England and "brought them notice of the death of their ancient friend Mr. Cushman, whom the Lord took away also this year."Robert requested that William Bradford “Have a care of my son as of your son,” which Bradford accomplished as Thomas grew up to become the ruling elder of the church.


Although he is buried half a world away, there is a monument in his honor erected at Burial Hill in Plymouth. 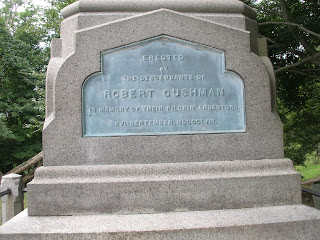 The monument to Robert reads:
Fellow exile with the Pilgrims in Holland,
Afterwards their chief agent in England,
Arrived here IX November, MDCXXI,
With Thomas Cushman his son:
Preached IX-. December,
His memorable sermon on “the Danger of self-love
And the sweetness of true friendship:”
Returned to England XIII December,
To vindicate tho enterprise of Christian emigration;
And there remained in the service of the Colony Till MDCXXV,
When, having prepared to make Plymouth His permanent home.
West side: –
He died, lamented by the forefathers
as “their ancient friend, – who was
as their right hand with their friends
the adventurers, and for divers years
had done and agitated all their business
with them to their great advantage.”
“And you, my loving friends, the adventurers
to this plantation, as your care has been first
to settle religion here before either profit
or popularity, so, I play you, go on. –
I rejoice — that you thus honor God
with your riches, and I trust you shall be repaid
again double and treble in this world, yea,
and the memory of this action shall never die.”
Dedication of the Sermon


A book Cushman ancestors would be interested in is Robert Cushman of Kent, by Robert E. Cushman and Franklin E. Cole. I purchased it last year and it is in my pile of books to read!

You can also download Robert’s sermon on The Sin and Danger of Self-Love through googlebooks.